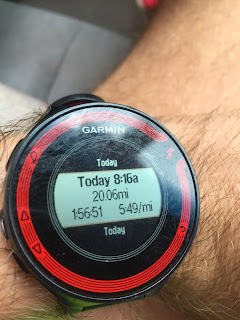 Earlier this month, an unnamed Pacers/GRC-NB harrier broke the 20-mile "record" at Duel Ferries, formally held by the turncoat Chris "Benedict" Sloane. The individual did not wish to make a "big deal" about it, as it wasn't his intention to get the record, though he wanted it noted for historical record keeping purposes. This reporter will respect his privacy, at least for the time being, though sleuths can pour over the photo above and attempt to identify the harrier based on his wrist hair and GPS watch model. The runner reportedly hit mile 19 and needed "only a 6:20" to break the 1:57:02 mark that old Sloane ran a few years back.

"Duel Ferries," also known as "Dueling Ferries," is a 10-mile loop that starts at Edwards Ferry near mile marker 30 on the C&O Canal Towpath in upper Montgomery County. After reaching Whites Ferry, nearly 5 miles later, the loop circles back on River Road. For nearly a decade, athletes have journeyed here a handful of times a year for a chance at an honest 20-mile tempo.

A Pacers/GRC-NB Wire Service reporter reached out to Sloane for comment, but failed to get an answer at time of press.

Epic. Hopefully it makes it way to Strava.

Happy to see it go down! I intend to reclaim it, however.

I second the Strava comment. You guys should get on it. It's like blogging about running, just with all of the prose and hyperbole removed.