Pacers//GRC - NB will be well represented Saturday morning at the Clarendon Day 5k/10k with over 20 harriers toeing the line.

The women’s 5k will feature Hannah Rowe, Maura Carroll, Shauneen Werlinger, Lindsay Bingaman, Chelsea Bollerman, and Elyssa Gensib. Bingaman, a former middle distance All-American at Shippensburg University, will move up in distance to tackle the 5k in her GRC debut. Recent University of Pennsylvania graduate Elyssa Gensib will also be making her GRC debut and hoping to match her success on the track to success on the road this fall.

The women’s 10k will feature Amy Nichols, Elena Barham, and Keely Eckberg. Barham, a 2015 graduate of Northwestern University and Academic All-American will be making her GRC debut.

The men’s 10k will feature Carlos Jamieson, Zak Miller, Phil Royer, Stewart Reich and Patrick Kuhlmann. After qualifying for the 2016 Olympic Marathon Trials, Jameson will look to kick off another stellar fall season. Reich and Kuhlmann will de doubling back on tired legs after running the 5k, but don’t count these talented harriers out of competing for overall and age group prizes in both races. 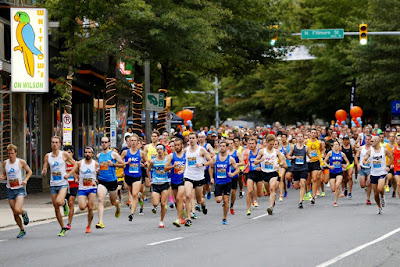