New Pacers//GRC-NB harrier Greta Stults was recently featured in the Pacers Running Blog.  Just a few short weeks ago, Stults returned to DC from Switzerland where she was posted as a Foreign Service Officer for the State Department.  She began to train with GRC coach Jerry Alexander before she moved abroad and continued to put in high mileage weeks while posted in Switzerland and Afghanistan.  As a testament to her strong work ethic and Coach Jerry's training plan, she has been able to drop her marathon PR from 3:40 to 2:59 last spring.  We are excited to see what she can do this November in the Richmond Marathon.

"Greta says there was no magic pill that helped her get faster. She opted to surround herself with people who were better than her and asked them a lot of questions on how she could improve. She made running a priority, worked to increase her mileage, and found it helpful to her to work with her coach. There is no one way to drop time but Greta has had great success with her training and now rather than practicing alongside GRC she is practicing with them. Clearly Coach Jerry knows what he is looking at even when the athlete is not always sure."

"Now that she is back in DC Greta is training for the Richmond Marathon in November. The humidity in DC has been a rude welcome back from her training in Switzerland. Running in Switzerland Greta says pretty close to the ideal. She regularly ran on the most organized and well-marked trails she has ever encountered. The possibility to run from one side of the county to the other without a map is not even a far-fetched goal. She does not love the out and back long run and would plan a route and take a train 20 miles away and run back. If she overestimated the distance the public transportation there was so good there was no reason to be concerned if her running math was off. All races were community events in Switzerland each one always had a podium and an awards ceremony. There is always food and celebration yet the field is still very competitive. She won first prize money racing there and at another race won a quarter wheel of cheese!"

"Training Around the World With Greta Stults" 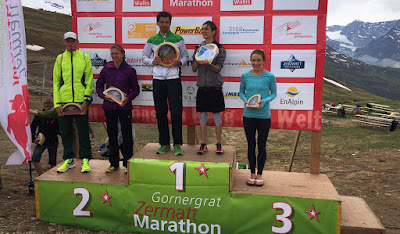 Greta Stults (far right) with her race winnings, a quarter wheel of cheese
Posted by Kyle Wagener at 12:01 PM