Frances Koons Hangs Up Her Spikes

Amid an action-packed weekend filled with several impressive debuts, our own Frances Koons ran her final race in a GRC singlet on Sunday in Philadelphia. For anyone familiar with her legendary Great Edinburgh XC performance in 2015, it should come as no surprise that the aversely hot and humid conditions at the Rock 'n Roll Half were no match for the indomitable Frances. She ran 1:15:29 for 3rd.


Coach Jerry had some kind parting words for Frances:

"Frances's long list of accomplishments includes being an 8-time All-American at Villanova, and competing in two Olympic Trials, in the 1500 in 2008, and the 5000 in 2012.  Frances came to GRC in the fall of 2014, and she has put an indelible stamp on our program in her relatively short time with us.  Frances made a memorable GRC debut at Clubs XC in 2014 at Lehigh, where she placed 8th in a loaded field, and earned a spot on the U.S. team competing in the 2015 Great Edinburgh Cross Country race.  Frances made the most of her first opportunity to represent her country, placing 8th, and she was 3rd American, and beat the reigning European xc champion.

Frances also excelled for GRC on the track and the roads, and she holds club records on the track in the 1500, mile, 3000, 2 mile, 5000, and 10,000, and on the roads in the 8k and 10k, and is second on the all-time list in the 5k and half marathon (and for those who want to get technical about it, her 10 mile split on route yesterday was a club record by 45 seconds).  Considering that Frances dealt with multiple serious injuries during her tenure with GRC, that string of outstanding performances is beyond impressive.  And it goes without saying that Frances's contribution to GRC extends well beyond the numbers. 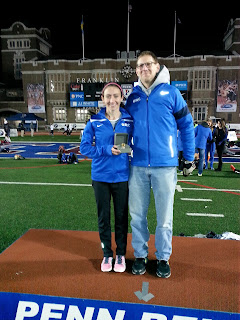 Having an athlete of Frances's caliber on board immediately elevated the entire team in numerous ways, including gaining us national exposure, and greatly helping our recruiting.  Moreover, Frances has been a true role model for all of our athletes, men and women, on how to approach training and racing with professionalism, pride, consistency, and dogged determination even in the face of major setbacks.  Frances is also a role model in terms of how to handle success, as she is unfailingly humble and self-effacing, and she is always willing to give her teammates the benefit of her vast experience.  Finally, Frances is one of the nicest, most thoughtful, and thoroughly decent people I know.

It has truly been my privilege and honor to have been able to contribute in some small way to her great success.  I know I speak for the entire team when I say we all wish Frances the very best.  And speaking for myself, I sure am going to miss that spunky kid!"