[Disclaimer: All, if not some, direct quotes were neither stated by nor taken from associated individuals.  All takes are mine and mine alone, and may only be reproduced with direct, perfunctory permission. Lastly, I reserve the right to flip sides on any stance I may take.] 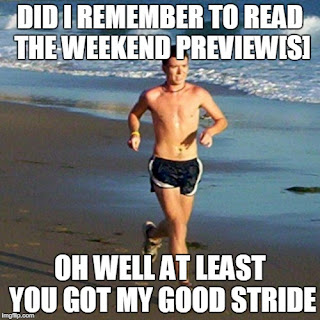 Workouts officially moved on from AU and, for at least the foreseeable future, GRCharriers will be hammering the grit and the glamour of the National Mall.  But don't take my word for it, check out this lit instagram. Did Robby Andrews come to DC just to take in the sights? I don't think so folks.

Let's get down to business.  We've got a YUGE weekend of competition as #fallracingszn kicks up a notch.

1st on the docket is the very gorgeous, very wonderful Philly RnR [1/2 'thon] of the renowned Rock 'n Roll marathon series. Toeing the line will be Lucas Stalnaker, Sean B., and Graham Tribble for the men and Maura Linde, Kerry, and Emily D. for the women.

Lucas, making his debut in the teal&white, is hot off a 5th place finish in the 10k at NCAAs last June.  Sources close to Lucas tell me he's "extremely fit" and "has a great, very wonderful, very big chance to make a big splash".  Sean B, as previously reported, is on a tear and looking to continue in the city of brotherly love [insert dumpster fire meme].  Graham's status is 50/50 but should he step to the line, competitors are likely to be enveloped in a sense shock and awe.

Maura will be debuting in the half for 2017. If workouts are any indication, she's fit and prepared to fly, figuratively and possibly literally too [jury is still out]. Kerry has been crushing the #hardtraining and looks to giddyup smartly and efficiently.  And similar to Graham, if Emily D. races, there's no telling the damage it will do to competitor's psyches.

The other big, and I mean big folks, event going on is the Navy 1/2.  The lively bunch featuring Kieran, Outlaw, other Ryan [S], Charlie, Ian, Sean OHHH, Mark, Tom, Tyler, and the silent killer Dr. Fridge are looking to send it for the men while Steph, Julie, Hallie, and Keely plan to own. Just own.

Don't forget the Navy 8k goes off this weekend as well with Stewart, Luk, and Chris running the race into indiscriminate and politically correct submission. Stew looks to be a major factor fresh of the first sub-14 5k GRC has ever seen.  You might call that fake news, but just connect the dots folks. Luk has been getting his studies on in College Park, and just generally getting more hip by the hour, so it should suffice to say speed is the largest byproduct, and the natural 8k-er will bring style and pizazz to the event.  Chris...well its Chris. He'll complete the race in a vanilla, esoteric manner. Because of this, he's the top dark-horse candidate in the race.  He's a blue collar working man hailing from Wisconsin [or Minnesota, somewhere up there]. When the Eau Claire native brings his lunch pail, watch out. Grit and grind at its finest.

That's it for now folks. Hammer it here for your #fallracingszn updates.

Steph switches to Navy 8k to make Stewart earn his keep and Graham stays close to home as he traded in garbage for gold [philly=garbage for all you readers out there, mainly Wiggy].  Look for Graham lacing it up with the Navy 1/2 gang.  The key to both these races will be keeping a healthy, compact pad level.  Low man always wins.