"We had a plethora of GRC debuts this weekend from members of our large and talented class of 2017.  In the 5k at Clarendon, Daniel Trettel led the way among the debutantes in 14:57, followed by Craig Morgan in a big PR of 14:59, Austin Hayslett in 15:30, Lars Benner in 15:34, and John-Louis Pane in 15:56.  On the women's side, Alexa Squirini ran 18:31, followed by Marianne Aguilar in 18:41.  In the D-II Showcase XC meet in Nashville, Russell Chase ran 27:01 for 8k on a challenging course on a hot day.  Daniel and Craig ran at the University of Maryland, and along with Lars, who comes to us from the University of Tampa, they will form the core of our new and improved men's mid-distance squad.  Austin, who ran at UMBC, JLP, who ran at GW, and Russell, who ran at Harding University in Arkansas, will be strong additions to our 5k/10k group. Alexa, who also ran at Maryland, will further solidify the mighty GRC women's mid-distance juggernaut, and Marianne, who ran at Florida State, will be a nice addition to our 5k crew.  Welcome aboard!

Back at Clarendon, Emily d had a solid rust buster, getting the win in 17:51, followed very closely by Chelsea in a PR of 17:51, Emily K in a big PR of 17:56, Erin in a post-collegiate PR of 18:18, Jackie in 18:36, Alyson in 19:02, Angelina in 19:36, LTO in 19:41, and GRC superstar to be Theresa Kennedy in 20:13.  The clear highlight was the return to form of Chelsea, who has not been fully healthy for the last 3 years.  It has seemed like every time Chelsea got back in shape, yet another injury popped up, and it has been a long and difficult process for her.  With her race yesterday, where she went stride for stride with Emily d all the way to the tape, Chelsea gave notice that she's back better than ever, and ready to make a splash this fall.

We had a routing interest at DCXC this year, as our two high school superstars were in action.  Nandini got the win in the junior race in 18:59, and despite struggling mightily with the heat in the last 400 and being wrestled to the ground by an overzealous, and quite possibly deranged red-headed finish line official, she was none the worse for the wear.  Ryan was 3rd in the senior race in 15:39, and he unleashed his big kick to great effect when he made the turn for home." 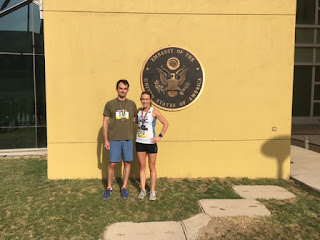 Greta raced the Semper Five "5k" in Kabul taking the overall bron[z]e in 21:56 which is probably in metric time so really more like 14:48.  According to source[z], the course was riddled with tight turns, construction and questionable accuracy [thanks obama].

You sure have noted the minutes of this event in such fine detail. Great job and hats off and congratulations to the winners. Keep writing!

It is convenient when there is someone who type my essay for me and I found such an opportunity. I use the best online assistant on the internet and recommend it to all students.

Our company prepares custom term papers and dissertations, as well as essays and articles on any topic. To order material from the company essaywriter.org - contact us in any way convenient for you and you will not regret your choice