Well folks, it's that time of the week. #ResultsSzn is officially in gear.  We've got YUUUGE results on the docket for ya.

First up is Lucas Stalnaker for his raucous showing at the Philly Half in a time of 1:05:26, good for #3 on the GRC all time list.  We haven't seen a debut like this since the szn premier of Lost folks.  And while young Lucas was not involved in a plane crash symbolizing the soul's dance between life and death, he was able to bring home 6th place honors and the covefe GRC Athlete of the Week.   Jerry noted that weather was less than ideal with the sudden onslaught of climate change and all, but Lucas ran strong and he ran smart with a bright future surely ahead.

Sticking with the Philly Half, Maura L. made her szn debut in 1:20:09, followed closely by Kerry Allen in 1:20:53.  The two had strong showings with a solid #fallracingszn ahead.  In addition, Sean B. ran all the way to a 1:12:21.  The humidity this year was as bad as years past. Thanks Obama.

The end of this week's results culminate in lifetime runner and friend Dickson, who raced at the 1st annual Henry Mercer Monmouth XC Invitational.  It's not everyday you get to run a race named after your father, and for your first born son.  So, good on ya Dickson.  You know what they say folks, nature vs nurture.  Nature always wins.  Keep that boy running Dix. 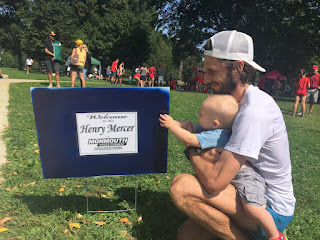 Giddyup
Posted by rwitters at 10:03 PM