[Disclaimer: All, if not some, direct quotes were neither stated by nor taken from associated individuals. All takes are mine and mine alone, and may only be reproduced with direct, perfunctory permission. Lastly, I reserve the right to flip sides on any stance I may take.]

Folks, today may be the first day of Fall, but you know what time of year it really is.  #fallracingszn continues to crush like an absolute savage as we look to the weekend ahead of fast racing, PSLs, and listening to Earth, Wind, and Fire. 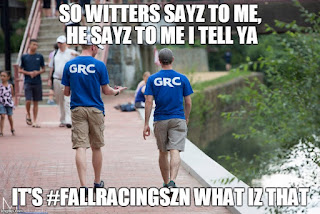 Before we get to the brigade marching down Wilson blvd., we've got a few other races to discuss. Stew is making a heroic appearance [in his own mind at least] at the Goldey-Beacom Invitational to beat up on some college flusies.  Steph, too is going to beat up on the same college flusies. Like seriously, she's running the men's race.  I'd be scared.

Emily Potter is taking her talents to Virginia for the 10 miler, while Maura is taking her lunch pail and blue collar to the capital of grit, Pittsburgh, to run the Great Race 10k.  All of this is going on while GRC-debutante Russel is making his low-key racing debut in Nashville.  Now to ward off any potential unwanted suitors, I have agreed to keep the name of the race anonymous until the results are posted, for young Russel's sake.

Closer to home is the monster Clarendon Day 5k/10k where Kieran snaked his way to a club record* a few years back [historians note that the former 5k road record was competed on a non-net downhill, USATF certified downtown Evansville course leading the race wire to wire].  Clarendon Day 5k/10k is known for its dramatic downhill start which typically translates to 5k PRs and 10k Why did I do thats.  Due to the volume of harriers and my lack of enthusiasm to create a [witty] writeup for everyone, the start lists are shown below.

Daniel, Craig, JLP, Austin, Lars, Alexa, and Marianne are making their debuts for the team. Let's hope they're better than mine.

Make sure your topic is neither too broad something which warrants a dissertation nor too limited. Decide what your goals are for the paper. What is your purpose? What opinion, view, or idea do you want to prove? Try to articulate your purpose clearly before you begin writing. If you cannot state your purpose clearly, try to freewrite about your topic. And you also will find some tips on how to write an www.freepaperwriter.com/ here. I think that you should check it out sooner or later.