First and foremost, there will be no organized practice tonight, Jan. 26, at the Bethesda-Chevy Chase High School track. 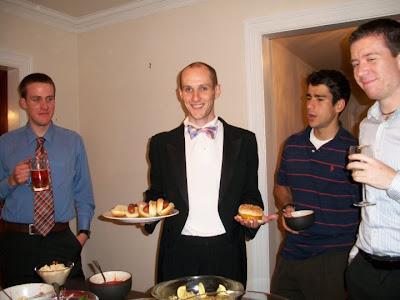 As the 2011 competitive season begins, the GRC racing team perches at perhaps its best position ever. The State of the GRC is strong.

Our cross country team, running a completely different top five than the year before, improved on its finish at the national club championships. We post multiple sub-32 performances in 10ks while sub-15 5k times are nothing foreign when we hit the race course.

More than a dozen runners show up every week to run in the dark around the Bethesda-Chevy Chase High School track, yearning for the glow from the single working light bulb at the foot of the homestretch. We sport runners at every level, all moving in one direction — toward the best performances of their lives. The synergy resulting from our group workouts and runs produces enough enthusiasm to power us on the chilliest of mornings, or most depressing of Wednesday nights. And we have a lot of laughs along the way!

Newcomers to the DC area running scene are finding the GRC to be the best fit for young professionals who know their best races are still ahead of them. Their ambitions for their vocation and athleticism are tempered and fortified by the successes they earn in both fields. They aren’t afraid of challenges, and likewise we should not be, either.

Texas Paul Guevara, known to his friends as Alabama Paul, persevered through a few weeks of near misses trying to catch up with the group before we left for Saturday morning runs. To his chagrin we were on time leaving, those few weeks.

Watch-less Jerry Greenlaw saw what our runners could do at the Cherry Blossom race last year, now he’s whipping around the track, pushing himself a few hours before he has to get up to go to work.

We face challenges from an axis of evil that includes Pacers, Potomac River Running, and ... Pacers. These foes will not prevent us from reaching our goals, but rather, will serve as stepping stones and guideposts.

You may notice some of your teammates sporting sleek new Nike warmup jackets. This is not a coincidence, but rather the product of hard work that goes into our primary fundraising venture, the Father's Day 8k. Proceeds from this race funded travel stipends to the Chicago Marathon, bought t-shirts for the entire team and subsidized the lodging expenses to the USATF cross country meet. As successful as the race was last year, there is much more room to grow, and grow we must to meet the needs of a burgeoning team. Outfitting 11 new runners doesn't work on the backs of a budget built for far fewer.

Let me be perfectly clear-- our continued prosperity and ability to meet our needs are wholly dependent on each and every one of you contributing your time, effort and skill to make the Father’s Day 8k a success.

The store has been a loyal patron and supports our goals, but only acting as an organization that takes responsibility for its own expenses can we truly achieve our goals of providing our growing team with equipment and opportunity to compete.

This year's cross country championship meet will be held in Seattle. That is obviously more of a financial commitment to make for a race than renting a van and driving to Charlotte. That said, the same expenses that we faced in North Carolina will be waiting for us in Washington, and our fundraising efforts will go to ensure that if our runners can get themselves to Seattle, the team can provide monetary support similar to missions to North Carolina and Kentucky.

Some of you might know a fellow nicknamed Nubbins. Chances are, thanks to his recent injuries, you'll know him more from his work volunteering at last June's race than more than any other place. Nubbins, who is holding himself to respectable and challenging goals for the Cherry Blossom race, offers what he can in a busy life to contribute to the team. His example should inspire each of you to find a skill that you can offer to make the effort exemplary of the excellence we perceive in our team.

Our information infrastructure remains mixed. The main blog continues to see a high volume of traffic and frequent posts, but unfortunately injuries have limited the training-specific content. Karl Dusen, however, seemed to just stopped posting in July.

Our membership spans the metro DC area and beyond, reaching Takoma Park, Columbia Heights, Bethesda, Falls Church, Alexandria, Arlington, Kentucky, Anacostia and even as far as Twinbrook. In each community, there exists an opportunity for each of us to offer of ourselves to make our communities richer. For example, Karl Dusen coaches the Special Olympics and Joe Wiegner accompanies young ladies on runs to protect them from assailants.

One way or another, we can enrich our local running communities, be it by participating in a local, small-time road race, lending aid to a novice runner we know or even creating public road loops on mapmyrun.com for others to consider.

As we embark on the next year, it is vital to remember that we alone will determine our success. There will be a point in each effort that we put forth, either in a race or while performing a task in support of the Fathers' Day 8k, where we will ask ourselves, "Isn't this enough?"

Only we can answer than for ourselves.
Posted by Charlie Ban at 2:08 PM

Let us know if we can be of any help. Thanks for the support.

This is a wonderful sentence:

More than a dozen runners show up every week to run in the dark around the Bethesda-Chevy Chase High School track, yearning for the glow from the single working light bulb at the foot of the homestretch.

Yes, that was a good one. I can't believe this post hasn't gotten more buzz!!

Twinbrook the city/town/borough does NOT exist! That very line you quoted having to do with this twinbrook nonsense totally ruined the address. Other than that, it was outstanding!