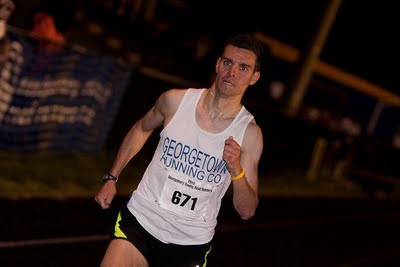 COLLEGE PARK, Md --
GRC track specialist, Ryan Hanson, and all around good guy, Joey Wiegner, will battle tonight over 1500m at the Kehoe Twilight track meet at the University of Maryland. Both Rockville residents aim to take down Wiegner's metric mile club record of 3:54.35.
Later, Charlie Ban will again take to the track to compete in the 5,000m run.
The men's 1500 is slated to start at 7:55 while the men's 5,000 is scheduled to go off 40 minutes later.
UPDATE: Wiegner wins in 3:55.5, Hanson second in 3:56.03

Can't wait to see if the record goes down, good luck guys