News Flash:
Karl Dusen won the prestigious Montgomery County Road Runners 2011 Runner of the Year award yesterday and also won the Piece of Cake 10k race in 34:22 at Seneca Creek State Park for an easy win. Rumor had it that he was later seen wearing his new prized Runner of the Year jacket at the Grosvenor Market thereby following in the footsteps of preceding winners. Security and surveillance tapes are being reviewed now in hopes of getting a candid photo of him sporting his new jacket. 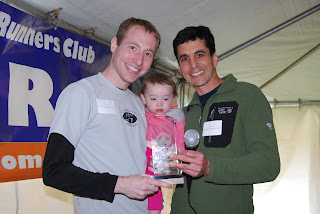 Sigh. They give this award to anyone these days.

Well, anyone except CTR.

GRC athletes have won this award a few times now: