GRC "bustin' out" this weekend


Hoping to capitalize on weeks of  training in unseasonable warmth, the GRC Racing Team is sending groups to Virginia, Maryland and Florida

The highlight of the weekend will no doubt be the Jacksonville Gate River Run, which serves as the USATF 15k championship. Seven GRC runners will joining an absolutely loaded field and hope to make some noise in the team competition, which will also feature McMillian Elite and the Boulder Running Company.


Sam Luff will headline the team. "Sam has had a fantastic training cycle so far," said GRC Coach Jerry Alexander. "He’s hit every single workout right on the money, and he’s ready to roll. While this is something of a tune-up for the major track races coming later this spring, Sam is going to run hard, and mix it up with the elite field." 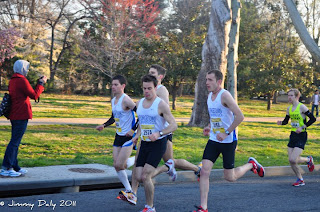 Alexander also expects strong performances from Jerry Greenlaw, Paul Guevera, and Dickson Mercer. "Paul is coming along very nicely, and he appears ready to pop a good one. Jerry has been training well, and he hopes to improve on his solid 47:57 from last year, which is the current club record. Dickson is preparing to run a big PR in Boston in April and has been logging very high miles, but he’s backed down this week and is ready to race."

The women will be led by Drea Garvue, who ran a PR in last November's Philadelphia Half Marathon. "Drea is in the best shape of her life," Alexander said. "She ran a 5k PR in January indoors, in a race where she lapped the entire field, and she’s been looking stronger and stronger every passing week. Drea is more comfortable with the longer distances, and with the level of competition she’ll be facing on Saturday, she has a good shot at a major breakthrough."
Garvue’s teammates Laura O’Hara and Elyse Shimada will also make their presence felt. "Laura is an incredible talent, but she’s going into the race with low expectations because she’s been fighting an illness the last couple of weeks. Laura is an extremely tough competitor, and Jacksonville is her adopted home town, so I know she’s going to run very hard. This will be Elyse’s first competitive race since October due to injury, and while she’s not quite back to her pre-injury fitness level, she’s looked very solid in training, and she will get after it on Saturday."

Meanwhile, in Ashburn, a group will take on the Van Metre Five Mile. The GRC has had success recently at that fundraiser for the Children's National Medical Center, capturing the men's title in 2010 (Dirk De Heer) and women's (Beth Young) in 2011, along with a dominating men's performance last year with five of the top nine places led by Karl Dusen's 24:03. Charlie Ban and Brian Young will give the race another shot, joined by Anna Holt-Gosselin, Maura Carroll, Susan Hendrick and Avril Ogrodnick.

Sunday afternoon, a slew of men will chase fast 5k times at the Kelly's Shamrock 5k in Bodymore, Murderland. Dave Wertz will continue his meteoric PRing in the 5k, along with Jake Klim -- returning to racing for the first time since last summer, Greenway Marathon champion Chris Bain and some guy named Andrew Sovonick.

GO GRC! This is going to be a great weekend!