It's another big racing weekend for the GRC, the biggest of the spring. Almost three dozen GRC jerseys will be on the roads and tracks around the mid-Atlantic, with one on the banks of the Mississippi.
Friday night, Sam Luff and Maura Carroll are at NC State, ready to take on 5k races at the Raleigh Relays.
"Sam is in fantastic shape, and he's going to be in a very fast heat, so he could threaten his own club record (14:15.2)," said GRC coach Jerry Alexander. Luff recently closed out a 4x mile workout with a 4:23. Carroll is making her 5k track debut, but is following up a solid effort in the winds of Ashburn, Va at the Van Metre Five Mile.
Meanwhile, Ryan Hanson is in St. Louis to run the 5k at the Washington University Invitational.
"Ryan is getting a late start to the season, and though he lacks race sharpness, he is in great shape," Alexander said. "He will be in a competitive field, and a PR (14:46) is a distinct possibility."
In the morning, Ryan Witters will take his club-indoor-mile-caliber feet to the Maryland Invitational, where he will do the 800/1500 double. "Witty will have a great shot outdoors at breaking the club record in both the 800 and the 1500," Alexander said. Jason Myers is aiming to take a chunk out of 5k PR the size of his bicep.

The main event, though awaits on Sunday. 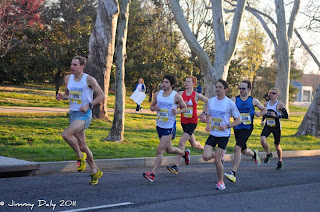 Twenty four men and women will be tearing around Independence Avenue and Hains Point. Ten will be racing for money, all will be racing for pride. The weather looks great for the Credit Union Cherry Blossom 10 Mile Run, the temperature a little under 50 degree when the gun goes off at 7:30. CB veteran Jake Klim will lead the team into Washington's annual rite of spring, with a few runners eager to prove themselves. Klim himself has not run a race longer than 5k in almost two years, but has a preternatural feel for the Cherry Blossom course and the distance. Karl Dusen, the top GRC finisher last year when the men's team took home the title, will take the the course with less preparation but no less intensity or desire.
"Karl's been looking good the last couple of weeks, and he will give it his all," said GRC coach Jerry Alexander.
Dave Burnham, coming off an impressive race at the National Half Marathon two weeks ago, is ready to cut loose and beat the race within an inch of its life.
"Drea Garvue is ready to make a major splash on the local road-running scene," Alexander said. "She is superb shape, and looks to run under 60 minutes."
Beth Young also had an impressive race in the half marathon and  hopes to follow that up with a big breakthrough at 10 miles.
Aside from the men and women racing for the elite prize money, the GRC harriers will compete against each other on intramural teams honoring GRC alumni. Dirk DeHeer and Dylan Keith's contributions to the team are being recognized and their tenacity and passion for running with no doubt sublimate to the runners competing in their names.

Anyone who is NOT running and would like to help me cover the race, please shoot me an email at runjimdaly@gmail.com.

This won't measure up to Towpath's productions but it would be great to interview everyone after the race and get lots of photos and video during.

All you need is phone with a camera to help...I can splice it all together later.

I love breathless hyperbole from the Red Fox and the... Sea Bass.