High winds in Jacksonville stifled many's hopes, with much of the course unprotected and almost daring the wind to take a swing at runners. 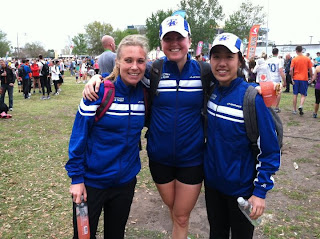 
Meanwhile, in Ashburn, VA, the GRC Racing Team won the Van Meter 5 Miler and in doing so collected about a million dollars in gift certificates to a local eatery. 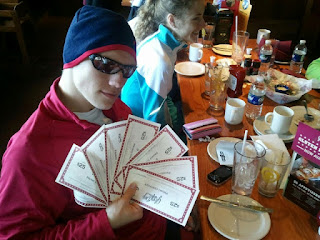 Karl Dusen and Anna Holt each took 3rd in their respective races. Dusen finished in 25:53 and Holt ran (unofficially) 29:10.

Unofficial results had Maura finishing 4th in 29:13, Hendrick 6th in 30:02 and Avril 9th in 32:35. actual times were likely 30 second slower across the board, based on everyone's stopwatches.

In Chambersburg, Pa. Matias prepared for next weekend's Shamrock Half Marathon by running 1:14:30.

Mom of the year goes to Holly Turner for the Gate River Run: she was our chauffeur, provided food, entertainment. She also must have sprouted wings, because she was the only spectator at the top of the bridge. Yelling loud and holding on for dear life in 35 mph winds.

It was a good weekend all around in Jacksonville