To all running Cherry Blossom tomorrow,

A little bird.....well...actually a pretty big bird told me that one of your teams has been named "Team Keith." As long as this is not some sort of morbid memorial name I am flattered, but I feel compelled to pass on a little lore surrounding the origins of Clan Keith. In the early 11th century the Scottish king Malcolm II defeated the invading Danish general Camus. After slaying the general Malcolm dipped three fingers into his opponents blood and drew three lines down his shield. Malcolm went on to found the Keith clan in the region of the same name. So what I am trying to say is...like..be all badass tomorrow, all of you.

I don't know the history of why Cherry Blossom is such a tradition in this club, probably something to do with the premier nature of the event, time of year, and the usually otherworldy canopy of Hains point. After some time I suspect and hope that the history of GRC at Cherry Blossom will become legend known to be at least as (metaphorically) bloody as the defeat of Camus by Malcolm II.

Brief update: I am now the operations manager of Feeding Crane Farms in Sacramento, the capital city of the famously famous and now famously broke state, California. Running here is good, but not the same without a full team of GRC yaayhoos.

I miss you all and again, good luck tomorrow. My mechanical farmy and I salute you. 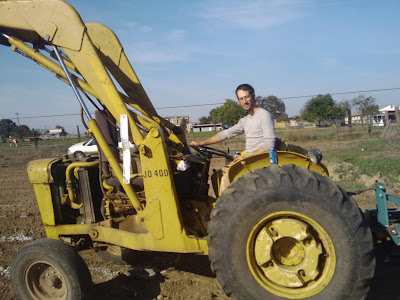 What?! Do you now get to drive a front-end loader at work, Dwayne? Excellent.