That fast monkey mama we know as Michelle Miller won a race today, the Annapolis 10-miler, in 1:02:57 (6:18 pace). She apparently ran the first 5mi in 33min (and therefore a second half at sub-6min pace, and that's a hilly course!)

A win is great, but what makes this even cooler is that it was her first race longer than 5k since the 2011 Philadelphia Marathon, almost a whole year. And, she subsisted entirely on a pop tart the day before. Quite a re-debut, I'd say. Oh and check out that massive trophy she won. You can't see it so well because it's clear, but I can see it. It's gigantic. 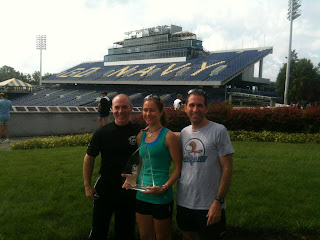 Picture nabbed from Lee Firestone's facebook page.
Posted by Andy at 11:11 AM

Nice work! Not an easy course/ideal weather either...