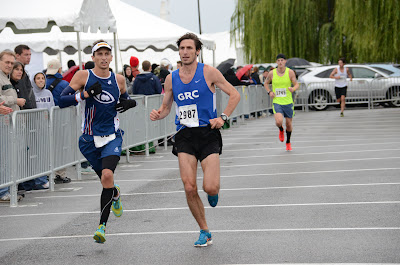 We had several strong performances this weekend, at the Wilson Bridge half marathon, and several other races in various locales, but the clear highlight of the weekend was the guide duty performed at the National Industries for the Blind Visually Impaired National Half Marathon Championship by six of our runners, Dickson, Andy, Scott, Chuck, Kirby, and Christina.  Not only was this a great way for the team to perform a service for the running community, it was a wonderful experience for each of our guides.  Our athletes who raced Wilson Bridge also distinguished themselves, led by Michelle, who was fifth in 1:19:57.  Michelle was bothered by a very tight calf, but she hung tough and ran a strong final 5k, despite knowing that she would not meet her goal for the day.  It's that kind of toughness that will propel Michelle to a major breakthrough in the shorter distances later this season, and on to a huge 2013.  Outlaw continued his comeback from injury with a solid 1:12:02.  In other races, Charlie easily won a 15k in Virginia, Jake easily won a 5 miler in New Hampshire, and Jason ran 15:48 for 5k in Virginia Beach.  Locally, Alex, Catherine, and Susan ran well in a hillier-than-expected 5k.  Well done to all!

1)  Those of you who told me you plan to run the Bull Run xc meet on Saturday must register with the comp code by TOMORROW.  If you want to run, but did not receive the message regarding the registration code, give me a shout right away.

2)  Because of the xc race, there is no practice Saturday.  If you aren't racing, and want to do a workout Sunday, let me know.
3)  If you can't make it to the workout on the mall Wednesday (more on that below), you are welcome at the NOVA practice on Tuesday, which will be at TC Williams, at 6:15.
WORKOUT
We will be on the mall, for a 7:15 start.  The loop is adjacent to the Smithsonian metro stop, and an easy jog from metro center. We'll meet at the southeast corner of the loop (see map below) for the warmup at 6:30.  I will be there to stand sentry over your stuff.  The loop is darn close to 800 meters.  Wear GRC warm up gear, so we can let the locals know who we are.
http://www.gmap-pedometer.com/?r=5145493

For those of you who are driving, LTO, our mall sherpa, reports that you can park in parking lot north of the Capitol Reflecting Pond, which is about a one mile jog from the loop. It's essentially the far end of PA Ave., closest to the Capitol.
See you at 6:30 on the mall on Wednesday.
Posted by KLIM at 7:28 AM