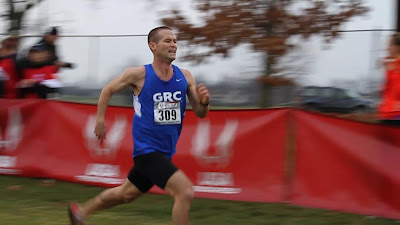 UPDATE: Ryan Witters will race the 800m and the mile run on Saturday at Princeton.

On Saturday, Sean Barrett will make his 2013 indoor racing debut at the Princeton Invitational where he will be racing the 3,000m. Arguably the fastest harrier on the team right now, Barrett, an active duty Marine, will use the race as a lead up for the World Military Championships in Serbia next month.

Said Coach Jerry Alexander, "Sean is coming off an outstanding performance at USATF XC, and he's using the 3k at Princeton, and the 5k at Columbia in 2 weeks, to sharpen up."

Barrett should easily crack into the top 5 times posted by a GRC athlete in the event.

"Sean is in PR shape", added Coach Alexander, "and if there is competition for him, he could threaten the club record tomorrow."

Thousand-meter specialist Hilary May will also be racing the 3k at Princeton and her result will undoubtedly be a club record...since no record exists.

"Hilary was disappointed to lose the chance to compete in the 3k at BU last weekend," said Coach Alexander. "She's looking great in workouts, and is ready to prove that she's made the transition to longer distances."

Kerry Allen is making her GRC debut in the Birmingham Half Marathon on Sunday.

"Kerry is a wonderful addition to GRC", Coach Alexander noted. "She's made the transition from high school phenom to marathoner, and is using the half this weekend to prepare for Boston.

Ken Rayner is also making his GRC debut in the By George 10k, which will be held on flat-fast Hains Point.

"Ken has excellent range, and while he's running Boston this spring, he will look to run PRs at every distance from 5k up in 2013."

It was thought that Ken might succumb to hypothermia after showing up to practice on Wednesday donning only shorts and a t-shirt. The temperature hovered around freezing and precipitation ranged from pelting rain, to slushy sleet to large flakes of snow. Thankfully, Ken was outfitted with proper clothing from kind-hearted teammates.

Dickson and I are going to run "Duel Ferries" on Sunday at 9:00am. Comment if you are interested. Some have hinted of a possible record attempt...
Posted by KLIM at 1:44 PM

I'm in for dueling ferries

I'm in for dueling ferries