A fall marathon season that has been marred by lurid scandals and vicious personal attacks on American distance running hero Meb Keflezighi (among others) sank to a new low last night when Marine Corps Marathon race contestant Jake Klim took to twitter at 3:15 a.m. to fire off a rambling missive in which he alleged that the race's scoring system was "rigged" against him and vowed to accept the race results "only if I win." In a thinly veiled attempt to shape the narrative in the event that he turns in a poor performance this weekend, Klim (seen below) spewed the following:

"My goal during this marathon campaign has been to challenge the running elite and the fat cats in Washington. Unfortunately, powerful forces in the mainstream media and running establishment are conspiring to ensure that I do not take my rightful place as the champion of the Marine Corps Marathon. If my name does not appear in the MCM race results this weekend, it can only be because the runner tracking system is rigged against me. Rest assured that I will be out on the course this weekend making the GRC great with every step I take and that I will accept the race results without hesitation or qualification, if I WIN!" 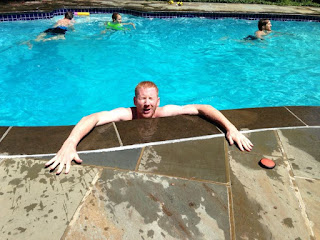 Klim added that, no matter the result, he would continue his quest in the Fall of 2017. Stay tuned to this blog for updates on this sad chapter in our nation's history.
Posted by Breezy at 9:04 PM