We will have a strong team on both sides at the 32nd annual Army Ten Miler on Sunday October, 9th.  Both the men’s and women’s teams won the open team category last year and are coming back to defend team titles.

Coach Jerry Alexander feels confident that the crew is ready to race: “We sharpened up with some relatively fast 800s on Wednesday, and we’re feeling good about our fitness.  If the weather cooperates, we should see a slew of PRs, and some movement on the GRC all-time top 5 list.  And even if the weather doesn’t cooperate, we’ll give it our best shot.”

Across the board our team members seem excited about the race.  Julie Tarallo captured the energy of the race best: “I always love the Army atmosphere.  Just when you start to hurt, you’ll pass by a wounded warrior with their head up and a smile on their face.  A tight calf or side stitch seem pretty trivial in comparison!”

Additionally, we are very proud to have two Pacers//GRC New Balance active duty teammates competing in this year’s Army Ten Miler.  Blake Taneff is a medical student in the Army at the Armed Services University and Sean Barrett is active duty in the Marine Corps.  We’re inspired by their sacrifices and by their dedication to our team and running despite deployments and busy military lives.  They will both be using the Army Ten Miler as an opportunity to get a good effort in for the upcoming Marine Corps Marathon.

Finally, we want to thank George Banker, the ATM Operations Manager for putting on the race and helping us enter our team in the elite section! 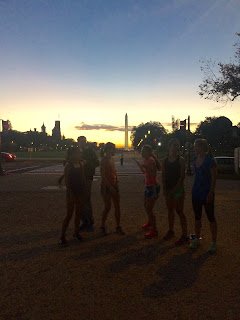 Pacers//GRC New Balance runners getting one last workout in Wednesday on the mall before the Army Ten Miler
Posted by Unknown at 4:32 PM