The Paul Short Invitational was a huge success for our team.  Michael Palmisano had an excellent GRC debut with a 25:33, an extremely promising finish as he transitions from mid-distance to longer distances.  Steve Soprano ran a very strong 25:54, which was especially impressive given he is recovering from an injury that curtailed his summer training.  Luk Olenginski ran a personal record in 26:01, finishing over 30 seconds faster than his time from last year.  He says of the race: “Jerry works wonders on us B+ guys.”  Kyle Wagener and Greg Olenginski both also PR’d in a time of 26:14. Kyle remarked, “We just want Jerry to be proud.”  After a contentious appeal, it appears Kyle crossed the line before Greg for 119th.

Kerry Allen and Keely Eckberg finished first and third in the Wilson Bridge Half Marathon.  The course was more difficult than anticipated and the warm and humid weather presented an additional challenge.  Kerry was racing it as a workout and while both were hoping for faster times, they still got in a strong effort. 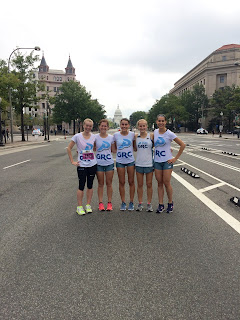