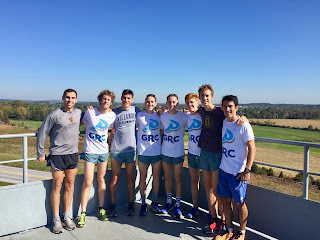 Many of the Pacers//GRC New Balance guys continued cross county success at the Gettysburg Invitational (8k) on Saturday. Michael Palmisano lead the team in 25:49 for a second place finish in his first D-III cross country race. Kyle Wagener ran a 26:19 for 8th, less than 5 seconds off his time from Paul Short a few weeks ago on a tougher, slower course.  Luk Olenginski finished 16th in a time of 26:29 and Greg Olenginski finished 18th in 26:34, both running faster than last year on this course. David McKay ran a solid 26:35 for 19th.  Dave Wertz improved almost 20 seconds from last year in 26:46, finishing 21st, which is especially impressive given he is almost double the age of the majority of the field.  And Sean O’Leary finished 22nd in a time of 26:48, only 2 seconds off his time from last year.  This team utilized some good pack running and managed to beat all but one of the 25 other teams.