Kicking off the new year 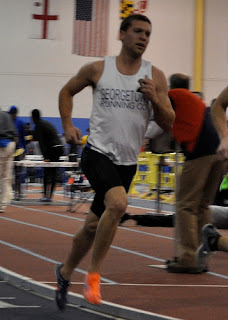 We have a few runners huddling indoors at the PG Sports Complex Saturday morning to start out the track season, and several "airing it out" in Phoenix at the Rock 'n Roll Arizona Marathon and Half.

Hilary May is making her 5k track debut, and hopes to repeat Drea Garvue's event-winning performance from last year.

Ryan Witters is looking to rebound from an unpleasant race here last year, and JR Roberts, finally back from an injury layoff in the fall, is sharpening his spikes like a pair of steak knives he won for finishing second in a real estate office' sales contest. Sean Barrett is getting a little break from cross country running as he prepares for the Armed Forces cross country championship and will give the 5000 a go.

Newcomer Tom Kelly will go after it in the mile and Big City will race. I'd let you guess what distance, but everyone would get it right-- the 800.

Meghan Lockett will go shoulder-to-shoulder with some women who are old enough to be her...older sister....

Check out the schedule here. 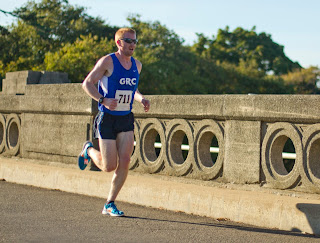 The main event will go off at 10 am eastern on Sunday, when our gang takes to the streets of Phoenix. Sam Luff, Drea Garvue and Dickson Mercer will chase their fortunes in the half marathon, and Jake Klim, Chris Bain and Brian Young will tackle the marathon. Though all of the competitors have demonstrated success in their respective races, Jake's race is going to be one to watch. It's been a few years since his last full, well before his 2010 breakthrough and his gritty "return to racing" in 2012. It's worth noting that Jake's been "on" as of late, with top-leading performances at the USATF Half Marathon Championships in June and the Club Cross Country Championships in December.

If you want to spend money to track runners, by all means...

Also, Outlaw is running the Frostbite 15k in Richmond.
Posted by Charlie Ban at 12:02 PM