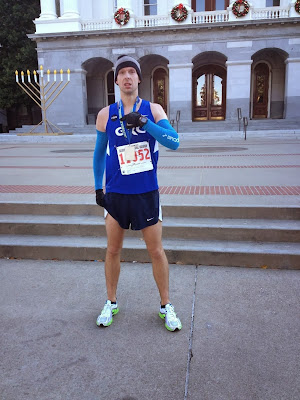 "I finished with nothing left in the tank just as Lauren (Woodall Roady) did at the USATF Cross Country Club Championships one year ago," Young said after the race while pointing to the memorial patch on his singlet.

His pace was extremely consistent:


"I've been working with Brian for more than 4 years, and he has worked hard every single practice for that entire time, said GRC Coach Jerry Alexander. "This major breakthrough is well-earned, and I couldn't be happier for him."

Beth, Brian's Irish twin, remarked: "We all thought Brian was crazy when he did a 20-miler at 6:10 pace in the weeks leading up to the marathon, but it turns out the hard training paid huge rewards."