He won the Three Bridges Marathon this morning in Charlottesville in 2:36:04 on a hilly course. He opened with a 6:03 and basically ran miles between 5:33 and 6:10 the rest of the way. Dave Hryvniak led early; Charlie caught him around 9 and he later dropped out.

This race was actually supposed to be held a week earlier but was postponed for weather reasons. Charlie, I believe, decided to run it on Tuesday-ish.

He won this medal and, like everyone else, a cup of turkey soup. 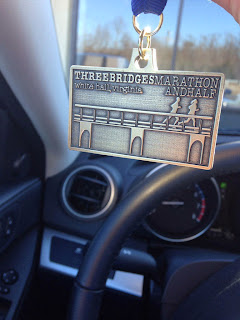 That's an impressive feat and a pretty mighty PR (2:50 before?).