Breezy poised and ready to send it at CIM tomorrow

Brian Young aka Breezy is ready for a massive marathon pr in Sacramento tomorrow morning where he is lining up to run the California International Marathon.  Breezy recently ran the Richmond half in November, where he managed to pr despite running through the eye of a squall.  Breezy is no stranger to Old Testament-like weather patterns, having attempted marathons in the heat of Boston and the gale force winds of Green Bay.  Conditions in Sacramento look favorable and Breezy is ready to take advantage of temperate weather and a net downhill course.  Breezy is familiar with the west coast, where he spends a fair share of his day job prosecuting fraudsters, and is ready to throw the book at his previous marathon pr of 2:48:50 (2012) on the streets of Sacramento.

Brian, pictured below, sending it circa 1995: 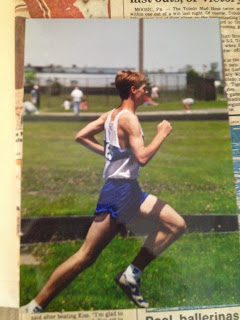