On Saturday, the men of the Georgetown Running Club will lace up its spikes and attack the grass at the 2013 USATF National Club Cross Country Championships at the River’s Edge Golf Course in Bend, Oregon.

“Clubs (as the race is known in most running circles) is a very important race for GRC,” said GRC Coach Jerry Alexander. “It's the one time each year when we can test ourselves against peer clubs in a championship race, and where everyone, from milers to marathoners, gets on the starting line together.”

This year, GRC will undoubtedly be sending its best team ever:

With so much talent this year, Coach Alexander admits this is a good problem to have. “We have six very strong guys up front, and enough depth that it's difficult to predict their order of finish.”

Luke Meyer is a very accomplished cross country runner - an All-American at Yale - and was 7th at Clubs in 2009.

“The fact that Luke is not our clear number one runner says a lot about our depth,” Coach Alexander said. “Mike Franklin has been our top guy most of the fall, and he's looked great in workouts the last couple of weeks, and it would surprise no one if he were our top man.”

Sean Barrett is a very strong runner and ran a fantastic race at World Military Cross Country Championships in Serbia this past March.

“The worse the conditions, the better Sean likes it, so he could be up front for us as well,” Coach Alexander explained.

Sam Luff is back to full fitness, and is always a threat to be our top man in any competition.

“Sam has had his sights set on Bend since the summer,” said a frequent training partner, “he’s looking for redemption after the team’s performance last year, for sure.”

Kevin McNab was a very good cross runner at Texas A&M, and has broken 30 on a hard course. “He could certainly pop a big race at Bend,” Alexander said.

The wild card in the group is Kieran O’Connor, who has not run a cross country race since high school! O’Connor did, however, run a fantastic race at Wilson Bridge Half Marathon (in which he broke 1:07) and has been setting personal bests all season.

“Kieran has been pushing the pace in workouts for several weeks.  I would not be shocked if he is our top man on Saturday.”

The GRC also got quality depth from Paul Balmer, who is returning to his home state and will have the support of family friends at the course, Tex Paul, who is an experienced cross runner and Matt Hassett, who continues to make great improvement every season.

Although all of the above 9 harriers will be racing, only the top 5 finishers from the Georgetown Running Club will score.

However, simply getting to the starting line will be a feat within itself for the GRC. The team will fly into Portland, Oregon on Thursday. Then, on Friday, they’ll ride two mini vans three hours into the Oregon interior and review the race course. On Saturday, the team will race and the next day begin the long arduous trip back home.

“It’s going to be a very long trip for us,” Coach Jerry admitted, “but we feel like we're ready to make a statement about how far GRC has progressed in the last year.”

In addition, the race is at altitude and the conditions promise to be robust.

“I’ve heard it is going to be a challenging course as well,” added Sam Luff, who also serves as the team’s vice president. “Obviously given the stories surrounding Max King (course designer and World Mountain Running champion), I would expect nothing less.”

Luff has been perusing the entry lists, and he admits, “It looks like it will be a pretty deep field.”

“Our goal is to finish in the top 10, and despite what appears to be a deeper field than recent years, I think that goal is realistic,” Alexander said.

Although Bend could receive rain on Thursday, the weather on Saturday calls for partly cloudy skies and a slight wind. The high is forecasted to be 40 degrees with a low of 25. 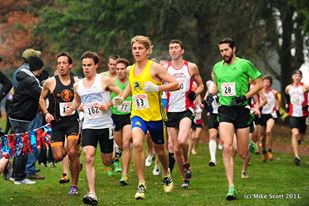 Sam Luff, on left, and Luke Meyer, then running for BAA.  © Mike Scott