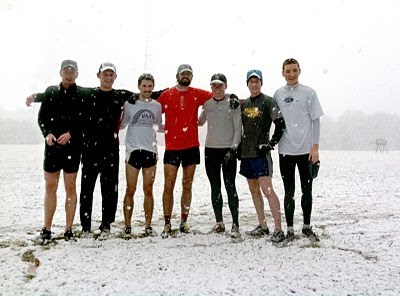 For the next 10 consecutive weekends, GRCers will be competing in races ranging from 5k to marathons. The racing season is about to begin.
On Sunday, Chris Sloane will aim for a half marathon PR and a 1:11 effort on the rolling Colonial Half in Williamsburg, VA. Closer to home, Andy Sovonick will be attacking the 16:00 barrier at the Love the Run Your With 5k, while Jake Marren races (tempos?) the 10 Mile Club Challenge. Nate Timm might also be racing here.
The worst of the winter is finally behind us (let's hope). Now it's time to remember all the hard work and race. Good luck guys.
WEEKEND RUNS - it appears as if the Saturday run will depart from the Chevy Chase Store at 9am on Saturday to coincide with the running lectures. I will be there and plan to run 18. I am heading out of town that afternoon, so I plan to get it out of the way that morning. If anyone wants to join me, let me know.
Posted by KLIM at 11:17 AM

I to plan to run 11 miles on Saturday, and would be much obliged if someone cared to help me push the pace to around 5:40 or 5:35 for five of those miles. Doggonit if I've never been to the Chevy Chase store, but I reckon there are plenty of good places to run around there, bein' close to the park and all.

I am hitting the pub(s) tomorrow post-work if anyone is interested. probably the Dupont area.

I'll probably join you for that

I will be (starting) at Buffalo Billiards circa 6pm...if anyone is interested.