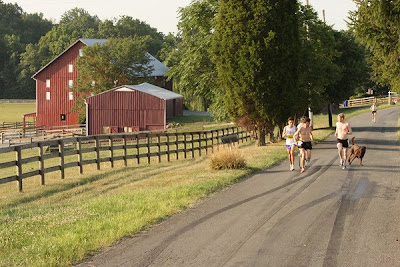 Yesterday was the annual Riley's Rumble Half Marathon beginning in Germantown, MD and traversing through the woods and farmland of Boyds, MD. Even with the hot scortching temperatures, runners still came out to participate in the non-timed event. All was well on course, especially up front until disaster struck. Andrew Sovonick of Germantown, MD (hiding behind helpless runners in photo above while on bike) was nearly attacked by an angry canine at about mile 7 on the course. Sovonick, a Montgomery County Native was out on course getting his daily bike ride in while cheering on teammates and friends running the event. As Sovonick paced 3 teammates (who requested to not have their names released), a dog came flying out of a boyd's residents garage and proceeded to run up on Sovonick and the three runners. "I have never been so afraid in my entire life!", said Sovonick last night during a pm interview at the Famous Dave's in Germantown. "I love Chicken Tenders but I don't have any beef with chickens while they are still alive." Investigation confirms that this attack had no affiliation with Sovonick's love for Chicken (in tender form) and the fact that the dog's property contained a chicken farm in the backyard.
Posted by Joe Wiggy at 7:00 AM

Additional late breaking news from the glass enclosed nerve center. ..T.E Ender returned to the scene, leaving his buddy’s to brave a late afternoon tornado. Upon returning to the scene Ender showed his United States Humane Society credentials to the canine and proceeded to cuff and stuff the beast.

I wasn't NEARLY attacked. I WAS attacked by that mangy pot-roast of a hound. He sunk his teeth into my knees. Or tried to.

Have you ever felt dog tooth enamel and saliva swiping against your knee??

This is just stupid.