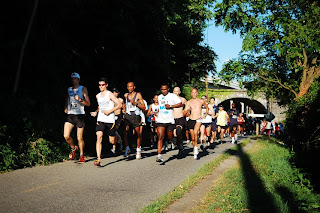 WASHINGTON, D.C. - Most members of Georgetown Running Company’s racing team will be on the sidelines, not the starting line, during Sunday’s Father’s Day 8K. Their duties for the GRC-sponsored evening race - which raises funds for the racing team - will mostly include handing out water, organizing, timing, instructing and cheering on the race’s hoped-for field of 300 runners.

A few lucky members of GRC’s racing team – Dave Burnham, Susan Hendrick and Kate Dart - will do their teammates the honor of racing.

GRC’s Joe Wiegner won last year’s Father’s Day 8K, held on a hot night, in 24:52. He was followed by Michael Wardian - an Arlington, Va., resident and the world’s fast mega-marathoner – who picked up his youngest son Pierce near the finish and carried him across the line in 26:01.

Wiegner will not be back to defend his title, as he is tapering for a half marathon in Seattle the following Saturday. Wardian, however, will take another shot at victory on Sunday - just a day after he goes after an Olympic Trials qualifying time at Grandma’s Marathon in Duluth, Minn.

Another recently-announced member of the men’s elite field is Andrew Dumm. The 2008 Marine Corps Marathon champion clocked 2:20:46 at the 2010 Bank of America Chicago Marathon, and has run under 30 minutes for 10K on the roads.

Hendrick, who competed for Georgetown University during graduate school and was a two-time Ivy League champ for Columbia University, took third at the National Press Club 5K in 18:30. She also placed fourth at the recent Capitol Hill Classic 10K in 38:45. Her personal best for 5K is 16:50.

Kayley Byrne, a former runner for the College of William & Mary, took the women’s title at last year’s Father’s Day 8K in 30:38. As of press time, she was not registered to defend it.

Contested during National Men's Health Week on the C&O Canal Towpath Trail, the out-and-back, flat-and-fast race will start and finish in historic Georgetown.

Updates regarding the Father Day 8K’s elite field will be issued in coming days.
Posted by DM at 5:49 PM