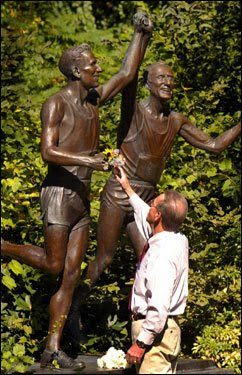 Earlier this month I decided I would review at least part of the Boston Marathon course since I plan to run it this coming April. I asked an old high school running rival and friend, Jim, to see whether or not he wanted to run it with me. He eagerly accepted the challenge and we decided we would meet in Natick (roughly the 10 mile mark) sometime after Christmas. Jim ran Boston last year and ran low 2:30s…he’s also posted some fast collegiate track times running for Trinity College. Anyway, running with Jim is always fun and he’d be a great guide.

I tumbled out of bed this morning and found my cockatiel (bird) on my comforter looking down at me…I’ll explain this later. Sheets of rain was pouring down outside so the last thing I wanted to do today was run 16 miles in the frigid rain. I called Jim a little past 8 and tried to encourage him to run tomorrow with me instead. The day was supposed to by 45 degrees and sunny. Can’t beat that! But no, Jim had to head back to Connecticut on Friday so I agreed to meet him. I rushed around the house; made some joe, grilled up an egg sandwich, began to hydrate then began the 1:45 trek from Cape Cod to Natick. I got to Natick Center in plenty of time and piddypatted about the square. A cold steady rain was still falling and I wanted to get started so I could get it over with. A big snowstorm was moving east from the mid-west and meteorologists indicated downtown Boston could receive at least an inch of snow.

I finally met Jim and the two of us began heading east…towards Boston proper. For the most part, the sidewalks were covered with ice; sometimes it was transparent and other times thick and bumpy. Clearly not an ideal running surface. I opted for the main road but that wasn’t much better. There was 3 ft of snow towering between the sidewalk and road which, over the course of the week, had avalanched into the shoulder. Jim and I talked about old times, new times, good times and bad times over the loud drone of wet tire wheels. We dogged along at a leisurely pace before finally making a right at the fire station…only this wasn’t the right right. After a few miles (who was counting?) Jim realized that none of this looked familiar. I didn’t take much stock in it at first…I mean who really remembers every turn and road of a marathon course? We stopped at a Dunkin Donuts to my delight. I had to take a pee and wanted to pound down a cruller or two before hitting the road. We asked the local gentry where the marathon course was and a homely looking woman with disheveled hair replied “that stars in Hopedale”. Actually it starts in HOPKINGTON, but that wasn’t the point, clearly we were well past that part of our journey and we weren’t interested in jokes. Finally, between three different customers, we figured out how to get back to the course…it was simply a minor detail. As much as I would have liked to hang out with my new friends and drink some hot DnD joe, I knew we had to get on our way. I left, egg sandwich-less and donut-less and headed back into the cold rain.

After about a half mile, we turned down a side street and got back on Commonwealth Ave…only to realize we had missed the Newton Hills! We then decided to backtrack and run back down the hills. Jim lectured me that this was certainly a part of the course I had to see. After about 10 minutes we reached the Johnny Kelley/Heart Break Hill Statue, then began the long climb back up 2 of the 3 big hills.

We were soon passed by a Greater Boston Track Club Runner and we began to shoot the shit. It turns out (which is no big surprise in the running community) we all knew someone who we each knew blah blah blah. I’ve already forgotten his name but “Kenny” was good company and he guided us all the way down to Cleveland Circle. Here we asked a few people whether we were on the marathon course and they giggled and squirmed how we had run from Natick and/or that we were running all the way downtown.

Jim and I soon started to get cold and it seemed like we picked up the pace…which was fine with me. I was still made I hadn’t gotten an egg sandwich and a Boston Crème some 5 miles back. Eventually we trucked through to the finish and slapped each other’s hand. Done! Made it! Okay, now let’s eat. We went to 7-11 and I gorged on a blueberry bagel and a Gatorade. Jim bought Pringles, snickers and God knows what else. We hailed a cab and together devoured our Thanksgiving Feast en route to my sister’s new pad in Southie. She then kindly drove us back to Natick, where I, in turn, got in my car and drove into the pouring twilight back to Cape Cod.

All said, we ran at least 18 miles. I was glad to see the course but running on the shoulder in the cold rain sucked. I’m realizing now this post is much…much, much, much….much tooo long, but I’m sick of looking at Santa. I’ve decided not to review or spell check.

KLIM
PICTURE INFO: Rich Muno’s sculpture ‘‘Young at Heart’’ depicts Johnny Kelley crossing the finish line at age 27, when he won his first of two Boston Marathons, and at 84, when he ran his last Marathon. Kelley, who ran the Marathon 61 times, died last year at age 97. The statue is along Heartbreak Hill, a name said to have been coined in 1936 when Kelley ran neck and neck with Ellison “Tarzan” Brown. Kelley tapped Brown on the shoulder as he passed him. Brown then sped up, and Globe sports reporter Jerry Nason wrote that Brown regained the lead, “breaking Kelley’s heart.”
Posted by KLIM at 7:36 PM

Jake, I love ya man but that run sounded damn dreary so I am OK with missing it. Glad you did not get run over by some irate Boston driver. peace

This was a great little read, Klim.