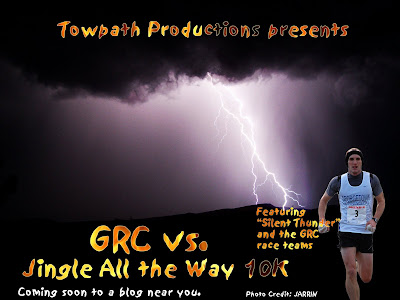 “You gotta have the game-day beard…”

“I did better than I really wanted to.”

“There were no goals.”

I got soul, but I’m not a souljah.

No viz effects as in Rockville Twilight 2G8, but still a veritable Slam Dunk, TOWPATH!

Due to the economic downturn, towpath productions has had to lay-off the visual effects dept. (I got lazy)

Once again, Peter, made feel like I was there.

For those who care, the GRC blog had a surge of views over the last two days ~ 145 individual people viewed it per day. Typically 75 people view the blog on a daily basis.

I think Peter is stealing from my CD collection-the Rockville Twilight 8k video featured Iron Maiden and the Jingle All the Way video was set to the Killers.

Thanks to him and Dylan for their efforts.

Seriously, Dylan. I think you have a future in broadcasting.
"You are so stuck up." haha
Good work, Peter.

Also, two of our ladies got some press in this interesting WashPost article:

Cool stuff, no need to wake up at 6am to watch the races...
Congrats to all of you guys (Peter and Dylan included), you did really a great job on Sunday

Unless this chiro does some kind of miracle cure when I go to see him next week, I will be on the sidelines during USATF XC. While it burns me up inside to miss such a prestigious race, it does provide the opportunity to make the most EPIC running video EVER. Stay tuned.