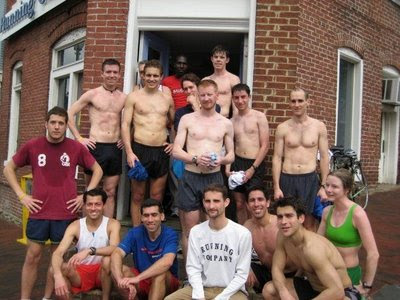 As 2008 comes to a close, here is a look back at some of the many successes the GRC has had this year. With the help of a few others, I’ve listed the accolades below in (roughly) sequential order.

BOSTON MARATHON - GRC Men (Reaves, Bain, Klim) place 4th out of 45 as a team at the "Boston Marathon". Top 5 (also including Patrick Murphy, Jason Dwyer) all run 2:36 or better. GRC the only team with three (let alone five) runners to finish within five minutes of each other. Solid performances by Jarrin, Max, and Ernst as well.

FREDERICK MARATHON - Melissa Tanner wins with a time of 2:56:17

The success of the inaugural GEORGETOWN CLASSIC 8K ~ 356 finishers.

The arrival of the NEW singlets!

How did YOU do this year? Please feel free to add additional attributes AND please list off your personal 2008 bests along with races where you PR’d.

Thanks Ben, Max, Allen, Sheena, Zach, Chris, Gene and everyone else at both GRC stores for your support!

A few weeks had just two runs due to injuries.

It was great tracking you guys online at Boston, when the group went through in 1:16 we knew you guys were putting together a good one. Looking back it seems so obvious now - the group trained together, keeping everyone honest and it paid huge dividends on raceday.

"Best Race of the Year" award goes to PReaves for his Boston performance. He slammed down a 17:35 5k split at the end over some of the toughest sections of the race enroute to a 2:31. Something tells me he'd like to go 78 seconds faster the next time around. Plus the inspiration behind it all... AWESOME.

"Grin & Bear It" award goes to CBain for his support role at Marine Corps marathon. Guy ran on one leg, unbelievable.

I finished 2008 with 4,500 miles on the dot. Thanks largely to training and racing with the GRC crew, I was able to:

1.) Keep my sanity my not running all 4,500 of those miles solo. Enjoying running comes before PRs in my book.

All in all a good year. Thanks for the kind words, Matias. In addition to being my favorite race of 2008, Boston was an incredible experience that will go down as one of the most memorable races of my life. The atmosphere there is intense.

Happy New Year, everyone...2009 should bring good times for GRC.

Get out there and run