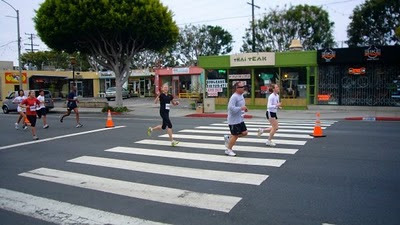 Los Angeles, CA - In weather that sent thousands of people to the medical tent to be evaluated for hypothermia, Arlington's Emily Norton placed 91st in the Los Angeles Marathon in a personal best 3:28:07. A cold, steady rain fell for most of the day, making conditions uncomfortable for the 23,500 runners.
Emily, seen here in some other marathon photo stolen via FaceBook, works Saturdays at the Chevy Chase Running Company.
WX WIRE: During the first six hours of the marathon, .78 inch of rain fell at Santa Monica Airport. Ankle-deep rainwater greeted the marathoners in Brentwood, and cold, wet winds lashed the finish line.

Fire dispatch channels were full of reports of soaked and hypothermic runners, and firefighters called for buses to return to Hollywood to pick up stranded. shivering stragglers.

One wheelchair racer flipped his rig on a wet La Cienega Boulevard, but was not injured, KTLA reported.

The race started at Dodger Stadium on nearly-dry pavement, but soaking rain and driving winds developed a half hour into the race.

Emily, congrats on defeating the deluge and running a Boston Q time!!

Thanks, Lindsey! Maybe I was picking up some good swimming vibes from you as I was wading through the streets of LA...

I was there, it was my first marathon and wow, the conditions were just terrible! Well done!!