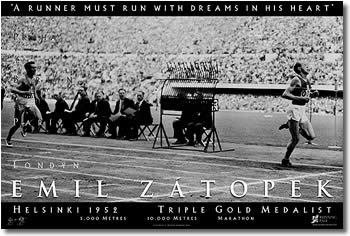 "A gradual reduction in training load in the period leading up to competition. Tapering is particularly important for those preparing for endurance events. It gives the body an opportunity to recover fully from months of heavy training and to adapt to increased demands. There are many examples of athletes who performed exceptionally well after they were forced to rest against their wishes. One of the most famous was Emil Zatopek who was training very intensively for the 1950 European Games when he became ill and had to stay in hospital for two weeks. He came out just 2 days before he was due to compete in the 10 000 metres. He won the race convincingly by more than one lap. He went on to complete the ‘double’ by winning the 5000 metres. Zatopek's performances demonstrated the benefits of tapering so clearly that their effects are sometimes called the ‘Zatopek phenomenon’"
Posted by Matias at 10:47 PM

Matt, you are old like me. Use your head and chill out. Get several massages and think pleasant thoughts. You will run well.

Max - We're runners. Meaning we know what's best but seldom do it. By default everyone on this forum is a knuckle head that pays a fabulous price in a quest to excel. The fact that we're older doesn't really make us any wiser.

I disagree. there is a reason that there a few master's runners in the area have remained strong for so long. They are the wise and smart ones and yes, a little lucky. However, the best have survived and thrived for a reason. Mostly intelligent training and taking time off.

I would like to think that this is a recreational hobby for all of us. I would say, that for the citizen runner, who wishes to achieve balance, its beneficial to remain healthy in the mind and body for the duration by taking it easy on one's self. I prefer this than seeking short term glory for a moment of satisfaction to the ego that comes with potential significant physical pain and injury.

There is always the exception to the rule such as Michael Wardian, who can run hard and well day after day and somehow stay fresh. However, he is rare.


Chuck Moeser is a good example of longevity. Its not simply because he is talented. I have watched him over the years and I attribute his longevity to his ability to simply stop running when he is not feeling it. In the past, he has taken months off and switched to something else like weight lifting biking, etc. to stave off the pounding and keep the confidence/cardio/fitness going strong.

I do know many a citizen runner who threw themselves fully at running in their 20s and early 30s and got badly hurt and have had serious physical problems in their 30s and 40s. These scenarios I have taken note of and try to learn from.

Of course, all have their own motors and motivation and to each his or her own.


Its all about the love

Everyone has different aspirations and motivations. I personally want to find my thresholds and am willing to sacrifice a long span to get as close to these goals as possible.

I used to race the mile and 2 mile. I no longer do, because I have reached my threashold at these events, and so they have no allure.

I used to care more about 5ks... but even these are losing their appeal.

10ks and higher draw my attention. I figure I will lose my interest in these events in a few years. After which, I will essentially retire and run only to stay in shape/health. I already see knee pain and do not want to feel crippled at age 50. God bless those who still race and go for it... but I'm too worn out at age 28.

I've known many better runners follow suit. Karl Parayna broke 4 in college and made two olympic trials. after his second, around 28 years old he hung it up and said he wanted to pursue other interests- he had given it his all, and looking back would have done nothing different. occasionally he jumps in a marathon off essentially no training and runs 2:45 for the hell of it.

summation- there are many noble goals out there... and max, your's is an admirable one, but not the only.

Everyone has different taper philosophies, I think Brian Sell ran 120 mpw leading up to Olympic Trials (please someone correct me if I'm completely off on this) when he usually runs 140. Here's what the Hanson's have to say

"The body thrives on consistency," says Kevin. "The taper is a way of resting without letting [your body] know that something’s up. [A full taper] is like sleeping 11 hours when you normally sleep eight—you sometimes feel groggier."

Most important thing is that you believe in whatever taper philosophy you adopt, and stick to it.

I'm kind of in the same boat as Dwyer... this sport is too selfish

It's a tough thing to do. I wanted to get in three weeks worth of taper, so I started two weeks ago. I think that is the right number because today I started to feel really great on my run, like I haven't felt in ages. Those first two weeks were strange though--all kinds of weird feelings in the legs. I really have to force myself to hold back.

One more week and I'll be ready...

I take a day off each week to freshen up and run 1-2 miles less per day during my taper. When I naturally want to run more or pick it up, I simply shut the engine down.

Over my last 3 weeks, I've run 93 (peak), 62, 62 (wanted to be 55)...this week will probably be 45-50. I have no problem taking days off and may take 3 off this week. I've also been runnning slower; forcing myself to scale back. Before the day off last week, I hadn't missed a day since I was limping in late February. So now, days off make me feel very fresh. On Friday I ran on a runnable section of the Billy Goat Trail where the pace was 7:30-8:00 for a few miles...just taking it very easy and enjoying the green clovers and the lapping current of the Potomac. It takes your mind off the time and, in turn, the pace.

On Sunday, I wanted to explode on Beach Drive (as I'm sure others did too). But we caged ourselves and ran as a pack; picking the pace up ever so gently and not pounding our legs in as we approached "the Line". Three months ago Reaves and I were hitting 5:15 pace at the end of 18 milers with somewhat ease. Now, 2-3 months later, it's nice to know that we can do that...but don't. It will also be comforting to know we've gone deep into the well before when we begin to hurt next Monday.

The important thing is "feeling" fresh or simply "feeling" ready (not necessarily fresh, but fit)...sometimes this is more mental than physical. As previously mentioned this is different for everyone.

It would be interesting to see what someone like Hall does in terms of a taper. these guys at his level, have to be so disciplined. almost like lance armstrong in his prime, in terms of watching their weight, doing the right stretching, precise workouts, etc.

Max, your wish is my command. There's a Podcast that discusses these questions and many more. Jump to 4:10 for taper strategy as Hall prepped for London.

"In the interview he talks about his preparations for his next race, this Sunday’s Flora London Marathon, his tapering strategy, expectations, not having a specific time goal, and many other details regarding his second trip across the pond"

...so much for getting stuff done at work.