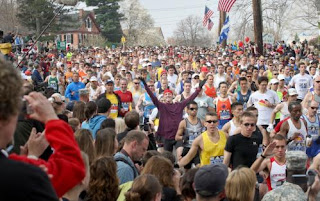 This was my first Boston, but I grew up in the marathon's shadow. I'm a native Baystater and longed to run the race long before I ever ran a step. As runners, my parents had both run Boston numerous times and I was constantly being toted up to a suburban Boston town by a Grandmother or someone to watch my parents blur past me. Before they arrived, I would marvel at the leaders who all donned singlets from countries I, as a grade schooler, had never heard of. It was an international event that ANYONE could do...if they trained.
I arrived in Massachusetts on Saturday evening. My teammate Jason Dwyer and I drove up together and we immediately hit the Boston Expo. I grabbed my number and bombed my way out the door, caught the “T” (train) and grabbed the first bus to Cape Cod. I then went into a nice leisurely rest until Monday morning.
Seven of my teammates from the Georgetown Running Company (Washington DC) had arrived in Beantown to conquer the world's most famous marathon. Five of us had a similar race plan and had trained together for the marathon since late last year. Our goal was to run between 2:30-2:35 but we narrowed our goal time to 2:33 after hitting a number of workouts at 5:54 pace. The tentative plan was to hit 13.1 in 1:17ish, maintain pace until mile 15-16 and then see what we had. We had done the work...now it was time to see what we could do.
When my bus arrived at Hopkinton a little past 8:00am the scene before me resembled a refugee camp. Skinny nervous characters donning trash bags huddled amongst each other in two large fields behind a high school. Some were jogging, some were sleeping, others simply chatted with one another, and I even saw one person doing some form of Yoga. Lines of people poured out from rows of port-a-johns. 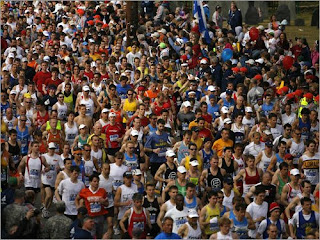 Our team of 5 included – me, Patrick Reaves, Jason Dwyer, Patrick Murphy and Chris Bain. We found each other before the race and trekked our way to the starting line. The gun sounded and our 5-man crew pushed our way through the crowded downhills of Hopkinton. The race drops about 150ft in the first ½ mile or so but our plan was to go out conservatively and be able to “turn it on” after the hills of Newton. Reaves and I led our group at the mile (6:04) where we quickly passed Lance Armstong and his posse of Live Stong groupies. The course continues to spiral downhill pretty significantly and we fell out of our pace a little hitting mile 2 in 11:49 (5:44). Obviously the pace seemed fairly easy and we settled into a groove. Our 5-man pack began to pass some people who went out suicidal and hit miles 3 and 4 in 17:38 and 23:47 respectively (5:48s). I believe we were at 2:35 pace after the 5k. Dwyer felt the pace was a bit too quick and told us he was falling back. I half-believed him and half-anticipated him coming back up along side me in a mile, but I took a solid look around mile 5 (29:37) and didn't see him. I quipped out loud “I've lost my right arm”. Our group of 5 was now 4.
Reaves and Murphy pushed ahead while Bain and I sat behind the “two Patricks”...still passing people. We hit 5:48-5:52 miles like clockwork until we got to mile 8. Our pace had been a tad fast (wanted to be 5:54) but the downhills made it too easy. My biggest fear was feeling too good and breaking free of the pace and dipping under 5:40, but that, thankfully hadn't happened. Our pack chugged along with a group of other runners. We soon caught a huge group of runners (25) around mile 10. Realizing we'd picked the pace up (52:34 at mile 9, 58:24 at mile 10) I tried to stay relaxed and tell myself I “only had 10 miles to go until the race began” and other helpful hints that spun the race positively in my favor. I felt excellent and knew I would likely run a good time. I heard a spectator shout “get on the train, it'll be faster”. I casually glanced to the left and smiled at the freight train chugging along at 5:35 pace. I felt reserved and ready to pull the trigger and get going. Mile 12 was my fastest mile to date (5:40) and then our group began to pick it up knowing that most of the downhills were now behind us (the first 13 is straight downhill).
Before mile 13 I heard a giant roar. At first I thought something bad had happened ahead of us but then I realized we were approaching Wellesley. I muttered “holy ___”. Reaves laughed and said “yeah, really”. A deafening symphony of estrogen soon surrounded us. I flipped up my shades and smiled for the first, and only, time in the race. I ran right along the edge of the female barrier and looked at all the “kiss me” signs and tried to take it all in without picking up the pace. We hit downtown Wellesley and 13.1 in 1:16:15 and now held steady mid-5:40s for the next 3 miles or so. Without realizing it at the time, the race for the finish line was beginning. We looked around at one another. I told everyone I was going to maintain until 18, hit the hills and then see what I had left. Then I said I'd wait until mile 17. We had already picked up the pace and I didn't want to pick it up any more. I caught up to Reaves, who always runs in the front, and whispered “go ahead”. I could tell he was antsy and rearing to go, perhaps this would be his day. He said “no, I am fine right here”. Miles 13, 14 & 15 were 5:44, 5:43 & 5:49. Reaves began to pull away around here. We had picked it up but I was content on trying to hold steady. Bain, Murphy and I watched as our friend soared ahead. The pack was now 3.

We encountered our first hill at mile 16 and took it in stride surging the downhill (5:41). We then made the famous right hand turn and rounded the fire station encountering the first of the Newton Hills. The race started to feel tough around here. Murphy and I stayed even with one another up and down the hill while Bain seemed to keep pace. My mile 17 was 5:55...the slowest mile of the race up to this point (excluding mile 1). Murphy and I watched Bain silently pull ahead and then amass a huge gap. Murphy and I ran 5:55 and 5:53 over the next two miles in the midst of the Newton Hills. Bain became a distant memory. “Come back Bain” I wanted to scream, but he was soon gone...
The crowds were screaming and in your face. Murphy and I got extra attention wearing identical singlets and sporting an identical slouched posture as we battled over hill and dale. We never spoke, but we made an agreement via ESP not to hammer each other during this stretch. I pointed out the Johnny Kelley statue, but Murphy didn't care. I told him we had one more hill to go; Heartbreak Hill (where some half century ago, the famous marathoner Johnny Kelley's heart was broken when a competitor surged past him to take the win) but Murphy only muttered something unintelligible. Mile 20 (1:56:45) was run in 6:07...mile 21 (Heartbreak) was a pedestrian 6:22. Still this pace was okay...it was a hill after all? But soon thereafter, the marathon began to be a grind. As we made our descent I turned to burp/vomit but only burped and dry heaved. I was a little dehydrated but the thought of Gatorade made me nauseous. Once in awhile I'd catch the whiff of kielbasa or burgers on a grill and I had to breath out of my mouth so to not smell the culinary odors. I dry heaved at least one other time and decided no forgo all other beverages.

Murphy and I were hurting pretty bad. We pushed down mile 22 (6:01) and tried to get away from the deafening Boston College crowds. I hated the cheers, I hated the noise. I wanted everyone to shut up, go home and for the love of God, I wanted everyone to stop cooking Bar BQ along the race course. “Shut up everyone” I told myself, “shut up and die...just leave me be. Let me run in peace.” I was no longer running fast and I felt as if the cheers were actually jeers and the crowd was mocking me. I wanted to get to Boston and get there quick but I wanted to get there without throwing up and/or collapsing. Murphy and I turned left at Cleveland Circle (which isn't a circle) and grunted our way forward. Mile 23 (6:19) and mile 24 (6:14) were flat as a pancake, but my legs wouldn't budge. Again the crowds were deafening and claustrophobic at times as they huddled around the course. If Murphy had worn a different singlet they might not be screaming so loud. Damn it, whose idea was it to have him wear the same singlet! I shook my head and tried to regroup telling myself I had 20 minutes to go, 15 minutes to go...10 minutes to go, but my legs wouldn't respond. I had hit the wall. Get me to the finish, just get me there. Mile 25 was 6:25; I was dying a slow death. I never realized it but Murphy had disappeared. He fell back.

PS - the second picture was a huge layout in the Boston Globe. Murphy and Dwyer can be seen fairly easily. Bain can also be seen in this version. Lots of great pix on their website.

You can just barely make out my sunglasses in the first picture.

The rest of the pix are from MarathonPhoto.

Wow. I feel like I was there! I love how you've captured that feeling of detachment from reality you experience while running a marathon. It's almost another state of consciousness where you don't need words to communicate with other runners. And the irrational rage you feel towards people who are cheering and cooking burgers, seemingly harmless activities- I think we've all been there. Thanks for sharing your experience with us, Jake.

Excellent review, Jake. I was dying laughing at some of your comments as I read this. You've said you probably won't do another marathon, but I think one day you will want to.

If anyone needs to kill more time reading and wants to know what the next challenge is, read this.

A deafening symphony of estrogen soon surrounded us.

That pretty much sums it up.

I never thought people could be so in touch with every moment. I just run the thing and have fun. I don't even wear a watch or do much analysis of mile splits and such.

I am a bit surprised you wanted the crowds to leave you alone, though.

where is the love

Terrific prose Klim...you captured the enormity of the event from a unique and intimate perspective like no other.

BUT what a colossal waste of talent it would be for you to "never" run another marathon...

I never said I would NEVER run one again...or at least I didn't mean to.

I am DONE with marathons for the next 5 years or so. I want to concentrate on breaking 15 for the 5k and lowering my times in 13.1 and below. In order to do this I need to work on my turnover speed while maintaining similar mileage.

I am getting old and soon I won't be able to PR in things like the 5k anymore...so it's time to have fun.