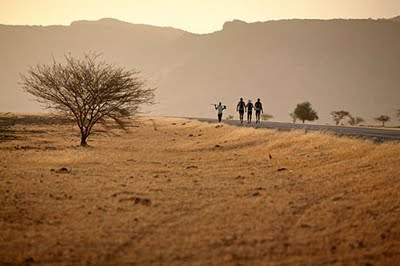 I received an email yesterday and will paste the import details below. In short, Running the Sahara will be shown on Wednesday, December 9 at 7:30pm at the Landmark Bethesda Row Cinema. There will also be a run with of the stars on Wednesday.This is a GRC sponsored event. I am fairly confident I am going to the film. It looks interesting.
We are having a film screening of our latest documentary Running the Sahara in Bethesda, Maryland. This public screening will be at 7:30 p.m. on Wednesday, December 9, 2009, at the Landmark Bethesda Row Cinema on Woodmont Avenue. Directed by Academy Award™ winner James Moll and produced and narrated by actor Matt Damon, Running the Sahara follows three Ultra Marathoners as they cross six countries in their attempt to become the first to run across the world’s largest desert. This moving documentary captures desert life in Egypt. I would like to reach out to members of your Running Club and their families to personal invite them to this special screening. Attendees will have the opportunity to meet Ultra Marathoner Charlie Engle and ask questions about his experience.
GRC SPECIAL
"GROUPSALE" is a promo code to use when you purchase the tickets online at www.runningthesahara.com. It will save you $5 off the ticket price.
Charlie Engle will also be hosting a 3-5 mile run an the Capital Crescent Trail at 12noon on Wednesday, December 9th. It will start and end at the CHEVY CHASE Georgetown Running Company....they will be giving anyone who comes to the 3-5 mile run a 15% discount on all shoes and apparel!!!!
Posted by KLIM at 12:42 PM

I as well. Should be interesting.