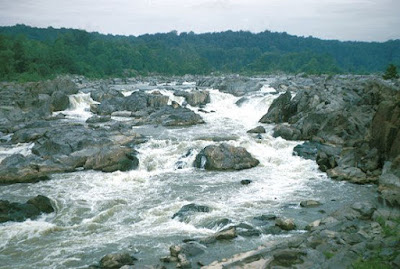 I propose meeting at Old Angler's Inn on Sunday for the long run. We haven't run here in a very long time and it is relatively close by for all of us (just off the beltway). There are some solid trails we can run up above Great Falls before venturing out to the Towpath. Additionally, I use to see a red fox quite often in these trails and I kind of want to see him again...
Possible route - run 5 in the trails above Great Falls (scan to the left and see "Gold Miners Trail" in map), then run north from Great Falls for 4-5 miles, then turn around and head back to our cars. This would be around 15 miles. Those who wish to tack on can keep running south-and-back once we get back to the bridge opposite Old Angler's Inn.
Takers?
Posted by KLIM at 3:26 PM

I haven't run the towpath in a month. I'm on-board.

Chris, I may join you since I am in the habit of running around 8. We can intercept the group after an hour of running. Also it may work well since I prefer to run the second half of my long run at FOX pace rather than the first half.

Ok. I will try to get there a tick early so you guys aren't waiting around after an hour on the run.

Also, I'm heading to the Store on Saturday morning for 10-12.

I'll be there Sunday.

i am running at 5am so if you want to meet me thats cool:) in all seriousness, i am down for the 830am run. Chris/towpath, where are you meeting at that time