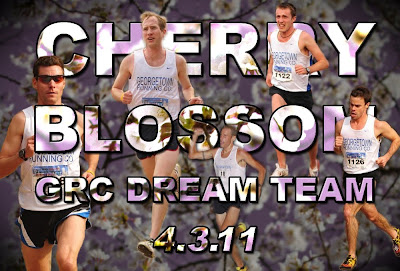 FOR IMMEDIATE RELEASE
WASHINGTON, DC -- The Georgetown Running Company Race Team will send its largest running force ever to do battle at the Cherry Blossom 10 Miler on Sunday. GRC's finest will be among the top Americans competing for an all-expense paid trip to the Peachtree Road Race on July 4 in Atlanta. Race officials have billed Lucas Meyer as the top American.
Karl Dusen, fresh off a 24:03 5-miler, leads a troupe of hard charging racers vying for the $1000 prize purse offered in the Washington Metro Area Elite Team competition. Jerry Greenlaw, Sam Luff, Joe Wiegner and Dirk de Heer complete the "Dream Team", while another 15 athletes will be racing for personal glory, personal bests and honor.
"I expect a huge race from Karl Dusen. Karl has been running fantastic workouts and very high mileage", notes Coach Jerry Alexander.

"I also expect excellent performances from two of our young stars, Jerry (Outlaw) Greenlaw and Sam Luff. Jerry was a little disappointed in his perforamance at the USATF 15k Championships, but he is focused and ready for a major breakthrough on Sunday. Sam is race sharp after winning the Shamrock 5k in Baltimore and running strong at Van Metre and is ready to show what he can do at the longer distances."

"Joe Wiegner missed some training due to illness but he has looked strong in practice for the last couple of weeks while Dirk is improving rapidly after taking time off from running over the winter to focus on his swimming and biking. His 15:12 5k at Shamrock demonstrates that he is ready to compete."
Dave Burnham appears to be in the best shape since donning spikes at Dartmouth while Andy Sovonick comes into the race fresh off a 5k PR in Baltimore.
We're also looking for strong performances from our women's squad. Alexander adds, "New GRC member Michelle Miller is in excellent shape and has a great shot to break 60 minutes, and Beth Young is also ready for a big PR, despite training through the race as she prepares for the Green Bay Marathon on May 15."
GRC Media will be providing extensive coverage of the event and results from the race will be "flashed" on this blog as soon as able.
THE TEAM
Chris Bain
Sam Luff
Dirk de Heer
Andy Sovonick
Scott Koonce
Jordan Snyder
Joey Wiegner
Jerry Greenlaw
Karl Dusen
Paul Guevara
Yukun F. Fung
Matt O'Brian
Matias Palavecino
Dave Burnham
Carlos Hunt
Emily Dusen
Shannon O'Neill
Lindsey Jerdonek
Ruth Morgan
Michelle Miller
Beth Young
GRC Expats Patrick Reaves and Billy Askey will also be racing.
GRAPHIC - Towpath Productions
PHOTOS - Mike Scott
Posted by KLIM at 12:02 AM

Fixed. Likely a copy/paste error on my part.

Good luck. See you guys out there.

What if you take out Karl?

Seriously. Look at his expression, the effort...what a tryhard.