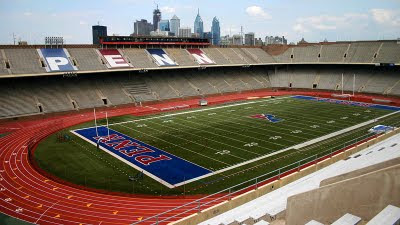 PHILADELPHIA, PA --
BREAKING NEWS: Sam Luff recorded his second personal best in 6 days, running 30:13 for 10,000m early this morning at the Penn Relays, arguably the greatest track meet east of the Mississippi River. Luff, gunning for a sub-30 race, hit 5,000m in 14:56 but then struggled for a few laps before hitting 8,000m in 24:05. This PR comes right on the heals of a 14:15 last Friday night in Princeton. Luff topped Ryan Foster from PACERS who finished in 30:41 and his younger brother, Tommy Boy, who runs for Penn State. Luff now leads GRC in both the 5k and 10k distances.

DEVELOPING...
MORE TRACK: On Saturday Chuck Kacsur will make his season debut in the 800m at Shippensburg...aims for 1:56.15 a new club record. Last week Chuck time trialed a 1:59.

ON THE ROADS: Dickson Mercer returns to his alma mater to run the inaugural Gettysburg North-South Marathon, competing for the Yankees (?).
Posted by KLIM at 5:27 PM

Nice work. You guys are really on fire.

Lots of attacking this spring, it seems. Not much standing down. Good job!

A PR despite waiting to race until after midnight?? Amazing. Great races guys!