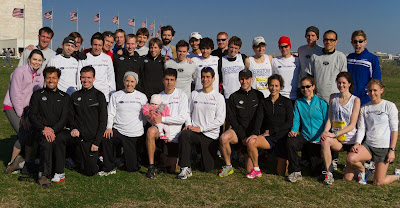 Editor's Note: I, Klim, followed a good deal of the race on a bike and below is my report...
The Georgetown Running Company Race Team had arguably its finest performance ever this morning at the Cherry Blossom 10 Miler in downtown Washington DC. With almost ideal racing conditions, the race team, led by Karl Dusen, left the starting line strong. Dusen hit mile 1 in a comfortable 4:56 just behind Americans Luke Meyer and Dave Nightingale and was followed closely by PACERS nemesis Bert Rodriguez and GRCers Jerry Greenlaw, Sam Luff and Joe Wiegner. Rodriguez and Dusen were running together just after mile two just at or under 5:00 minutes per mile. By mile 3, Greenlaw and omnipresent distance guru Mike Wardian led Luff in a chase pack after what appeared to be a struggling Dusen. Dirk de Heer and Dave Burnham were stride for stride some meters back. In the race for top American, Meyer, at mile 5, continued to lead Nightingale by a healthy margin. Meanwhile, Rodriguez seemed to surge after hitting the halfway mark and Dusen continued to struggle. Wiegner had fallen off the pace some and now ran stride for stride with de Heer. Burnham was just a few strides back. At mile 6, Greenlaw, with a determined look in his eye and his small frame leaning into a Hains Point wind, led Luff and Wardian. Luff looked comfortable and strong. It was clear he would soon make a push. Dusen still trailed Rodriguez, considerably, heading out towards the tip of Hains Point.

At mile 8.75, the tide turned. Through a tunnel of pink cherry blossoms in full bloom, Dusen emerged ahead of a "worked" Rodriguez. Bert's form had now deteriorated and Dusen looked like he does going into the last repetition of a Wednesday night workout – tough as nails and fired up. Luff by now was GRC's number two man heading into the last mile. Outlaw looked tired, but not beat. In five minutes, it wouldn’t matter anyway..they’d be finished.

ANALYSIS: Dusen, Luff and Outlaw all had very strong days...Wiegner labored some after battling illness and injury but still ran well and possibly PR'd...Dirk de Heer continues to amaze the running world by running great times while training for triathlons...Burnham ran his best race by far in a GRC singlet...Matias PRs huge(!)..Sovonick PRs huge...Guevara runs 54 and change after missing multiple weeks due to an injury...Jordan is only 3 seconds off time from last year after succumbing to hernia...Carlos Hunts debuts in GRC garb. Michelle Miller might be the top local woman...Lindsey Jerdonek runs an incredible 60:40 and PRs…

I think the baby is biggest highlight in this picture!!!

Six under 52 wow that is incredible.

I hear that Patrick Reeves fellow is a clown.

Patrick Reaves, on the other hand, pretty cool dude.

I just saw the result, ouch!!!

Man...Towpath takes 1,421 photos and I decide to make a face in one of them. Apologies for the GRC photo-bomb.

Great job guys and great catching up with you all this weekend. You're well on your way.

I could easily photoshop a non-goofy expression of you into the master photo, but I think your photo bomb livens up the picture.

Awesome job! A truly inspiring performance from everyone who raced.