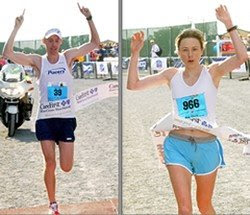 Why ? I guess I should start here. When I didn’t register for in time my criteria for a spring marathon were primarily financial; as a graduate student, I was looking to win some money without having to pay an exorbitant entry fee or travel expenses. This didn’t leave me with many options. This race also has sentimental value for me. My first marathon was the 2006 , which was an overwhelmingly positive experience. Also, my mom’s side of the family is from . I remember going on many a run with my sister down the country roads near my grandmother’s house. Afterwards we would pick fresh apples from her yard, bake pies from scratch, and all sing “Kumbaya” by the fire. Not really, but I do have a nice history with the city and race. Plus, the make for a beautiful backdrop.

My strategy going into the race was to try to run a PR and to do so in the most pleasant way possible: through even splits. This has proven to be easier said than done for me, probably because my goal pace has been a little ambitious in the past. I eventually want to run 2:46:59 (the current Olympic trials standard), but I’ve learned that setting out to do so before I’m ready only leads to run-ins with “The Wall.” I estimated that I was in 2:55 shape, so I planned to run 1:27 for the first half (6:38 pace). I knew that the second half of the course was hilly, but I decided not to try to “bank” time at the beginning to make up for the hills at the end. That strategy didn’t work out so well for me at Steamtown.

When I got to the Frederick Fairgrounds, where the race starts, I realized that I had an hour to kill and not much warming up to do. Jake was able to calm my nerves by telling jokes and doing somersaults. Eventually it was time to make my way to the starting line. I saw Chris Bain and Robert Jarrin, which gave me a little extra motivation. I thought to myself, if these guys got up at 5 on a Sunday morning to watch me, I better run well. During the national anthem I found my mind wandering to all the lessons I’ve learned about marathoning over the past 2 years and again reminded myself to be conservative with the pace.

The gun went off, and it was really tough to let the other women go. I knew that some of them were in the relay or the half- and some were going out too fast- but it was a struggle to hold myself back. I came through mile 1 in 6:36, which I was very happy with. At that point I looked around and recognized a guy from who I’ve seen running workouts at the B-CC track. We said hello and from that point on we were never more than 2 seconds apart, which was helpful considering how desolate the latter half of the course is. I stuck to 6:36 pace (on-the-nose) for the first 4 miles. I unintentionally picked it up for the 5th mile, dropping to 6:24. People were very chatty in those first few miles. One guy running near me kept trying to do fancy, behind-the-back shots with his water cups to get them in the trash cans. He never made a single one (that I saw anyway- he died off after about 7), but it was entertaining nonetheless.

I settled into 6:40 pace for the next 5, coming through 10 in 66:06. I passed the girl who was in the lead for the marathon at mile 6. I could tell that she had gone out way too fast because her breathing was already labored. At that point I was pretty sure I was winning, but it was hard to tell because there were a few half-marathoners ahead of me. At one point 3 different spectators called out, “You’re in first!,” “Way to go, third woman!,” and “Here comes number 4!” within a block. I joked to the guys around me, “4th??? A second ago I was winning!”

I continued on at 6:40 pace, coming through the half in 1:26:46- right on schedule! At that point Jake gave me a gu and I introduced him to my racing partner, a possible addition to our running group. He said later that he knew that I must have been feeling good because when I don’t feel good in a race not only do I not want to talk, but I also don’t want to be spoken to or cheered for. It seems counter-intuitive, but the noise actually makes me feel nauseated.

From there on out the numbers are a little fuzzier. I kept trying to calculate my pace, but I don’t think my brain was getting enough oxygen. I was having a hard time holding the splits in my head to do the math. It occurred to me that if I had to take an intelligence test at that point I might have scored an 80, tops. I stayed at 6:40-5 pace through 17 when I got to the hills. It seemed like the wind picked up at that point too. Dun dun dun. My pace didn’t slow too much over the first hill, and my 18th mile was a 6:53. I was surprised to see that my next mile was a 6:30, but it concerned me because my racing partner commented that it was probably because that mile had such a steep downhill. “What downhill?” I asked him. I honestly thought that mile was uphill too- not a good sign. That was my last sub-6:40 mile of the race.

I think I hit a few 7 minute miles between 19 and 23, when the ground finally flattened out. Somewhere in there I stopped worrying so much about time and concerned myself with finishing and maintaining my lead. I was getting updates from the guys, so I knew I had a several minute buffer zone.

From 23 on was basically a count-down. 21 minutes to go, 20 minutes to go, 19 minutes and 30 seconds to go, etc. I felt like I might vomit at one point but managed to hold it back. When I got about a half-mile from the finish Jake caught up with me again and tried to offer encouragement, but by that point I was not able to tolerate noise. I shh’ed him and he seemed to understand. I proceeded to the line and even managed a bit of a kick. When I crossed it I actually got to break the tape for the first time in my life. What an amazing experience! Reporters from the local papers immediately surrounded me and I struggled to offer coherent answers. I was even filmed for a local website (why is it that my 15 minutes of fame came when I was a disaster both physically and mentally?). After all the hoopla I met up with my parents, Jake, Chris, and Robert to enjoy the festivities. Robert took some great pictures, which was much-appreciated. I ended up running a PR (2:56:14) and taking away the top prize ($500).What else can you ask for?

The day ended, after many flip cup victories, with me drinking a Blue Moon out of my victory chalice, as it should be.

It was a great race Melissa! You looked strong and confident throughout. Really well done.

Melissa,
Kathy Freedman from Run Washington was looking for race reports from Frederick. If you are interested in sharing it with a wider audience: kathy@runwashington.com

P.S.
Other runners like Klim and Reaves have been writing great race reports as of late and might want to forward Kathy these reports in the future.