With a race the likes of which the GRC racing team put together today in Charlotte, it's hard to see the year come to a close.
Joe Wiegner closed the year in a markedly different fashion than last year. In 2009, forced to work out on his own in advance of the USATF cross country meet, Wiggy injured his achilles tendon, taking him out of the race and away from training for a few weeks. Today, he showed up and led the team with a 61-st place finish in 31:11- a 10k PR. He ran the best race of his life, according to coach Jerry Alexander. "We went out hard, hung on, had some trouble in mile five, but closed well."
Once a miler in high school and college, Wiggy's making the long-distance breakthrough to marathoning next year.
Our top five were all out under five minutes, with Wiggy leading the team in the top 40.
Wiggy comes through three miles in 14:48, about seven seconds ahead of Bert, behind him,
Texas Paul, Luffy Combs, Hanson and Outlaw all made up a 30-second spread. Dusen comes through three in 15:48 with Murphy and Eversmeyer behind.
At four miles the pack was extremely deep. Wiggy could be 4oth, or he could be 60th. Tex, Luff and Hason are behind him, Hansons running on Bert's heels. Outlaw is in fifth for our team, Dave in 6th, Karl moving up. Patrick Reaves was running close to Outlaw.
Texas Paul Guevara followed up with 31:32 for 83rd. Tex was reportedly not particularly pleased with his race, but Alexander thought his even racing said a lot about his preparation for the Houston Half Marathon next month. 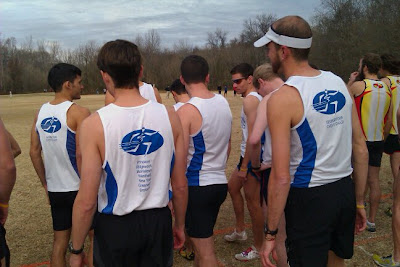 The surprise of the race came from Sam Luff and Ryan Hanson's close finish, 97 and 103, respectively, with 31:43 and 31:47, the latter being Hanson's new PR. Alexander remarked that Luff's smooth form up the hill (a steep affair the racers encountered three times) served him well. Luff didn't race much in the fall, but he blew away any rustiness with a consistent race today.
"The course was a fair challenge for guys at this level," Alexander said. "Times were impressive considering the layout."
Jerry Greenlaw was disappointed with his 144th place finish in 32:22, but Alexander said the performance was pretty good, considering the mileage Greenlaw has been running lately, as he trained through the race.
Former GRCer, now North Carolinian pariah Patrick Reaves finished two seconds behind the Outlaw in 150th. Let's never speak of him again.
Dave Burnham and Karl Dusen served as displacers at 196 and 198, running 32:57 and 33:00.
"Karl had a rough day out there, but he didn't want to let his teammates down," Alexander said. "That meant sucking it up and competing, even though he wasn't in the best shape to do it right now. He led by example by putting himself through pain he didn't have to, but as a leader, he couldn't ask anyone to do anything he himself wouldn't attempt.
"Burnham showed there's no question to his ability- if he can find the time to do the training, he'll be up there with the other guys in six months."
Partick Murphy ended his long season running 34:27 for 273, just two months after running the Chicago Marathon.
"My body is wrecked, though, so I probably couldn't have gone much faster," he said.
A week after winning the MCRRC Cross Country series title, Alex Eversmeyer took a day off of beating up on 40+ year-old men to finish 291 in 34:50, one-hundreth of a second back from Billy Askey.
Teamwise we finished 14th, well behind the Pacers in fifth, but edging out Charlottesville's Ragged Mountain Running, beating the Manhattan and Central Park track clubs and the Colonial Road Runners. Generally, we finished among the top "part-time" clubs in the competition. When we go back to our jobs as teachers, consultants, engineers and writers/web editors, we are fitting our running pursuits into full and well-rounded lives. Not to say other runners don't also, but to have a pretty good showing against a lot of runners whose professional lives revolve around running is a nice accomplishment.
A lot of runners we've seen in our collective and individual pursuits were there today- Tim Young, who now runs for Hanson's and did an outstanding job at Cherry Blossom finished 23rd. Outlaw's buddy Fred Joslyn finished 52nd, and Big City Chuck Kacsur's California University of Pennsylvania teammate Chris Clark was 65th. Father's Day 8k 2009 champ Guy Alton was 82nd. Wiggy's college teammate Ryan Blood was 20th, and my high school neighbor (rival makes it sound like I was fast) Ryan Sheehan was 14th after leading early. Murphy's PSU teammmate Ian McCann was 237th. Not sure why I am mentioning these, because the people who care already noted these finishes. Oh well oh well...
Posted by Charlie Ban at 1:40 PM

Garbage race for me, but everyone else ran amazingly. So much fun to be a part of the team and to get out and [compete against] watch such a strong field (from the back of the race). Look out, Seattle!

well written recap charlie. The guys ran very well. Hanson almost wasn't able to come per work, so I'm glad those NIH mice weren't born and he was able to get on the bus.

Pacers finished 5th which is incredible. Bert was their 6th man I believe.

We did some recruiting for a possible new member.

Raabe - next year? we could get top 10 with your help.

Way to go on a strong showing!

Charlie, thanksss for the recap.