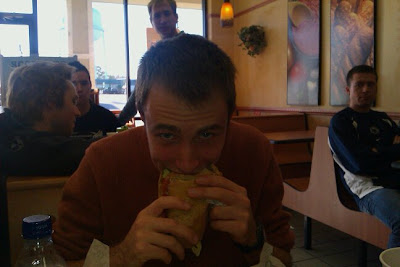 I think this is the Outlaw, but I have no idea what is on the sandwich he is eating. 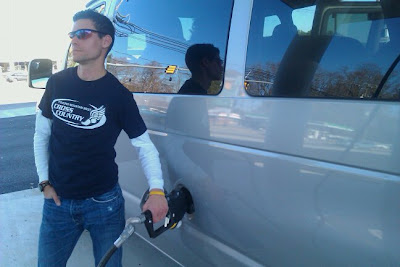 Joe Wiegner adds gasoline to the van carrying the team to Charlotte, N.C. Gasoline is crucial to the internal combustion engine used in the automobile to propel it forward. If Wiggy had not taken this step, chances are the van would have ceased to operate. Then Wiggy would have screwed up. Everyone would have said "Wiggy! Why'd you do that!"
It turns out he would have done that because Wiggy had gotten lost, after misjudging the amount of time it would take to get to a gas station. It is my estimation that this was taken somewhere near Howard University, nowhere near the route the team was supposed to take.
This don't make a lick of sense...
Posted by Charlie Ban at 2:44 PM

Nothing says, "I'm one bad mutha," like striking a tough Philly pose while looking into the distance with an Obama future-stare and pumping petrol into a 15-passenger van.