So who's headed to the 2008 Olympic Track and Field Trials? In a momentary lapse of reason, a few of us this past weekend decided to book our flights to Eugene Oregon (Silverman, myself and Bain is in the process). So far I know the list of confirmed attendees stands at Klim, Jennifer May, Geir Sande Lie, Gabler, Silverman, me and ... (please fill in the blank).

On another note, yesterday a group consisting of Bain, Camacho, Dwyer, Keith, Klim, Silverman and I trekked out to the woods of Frederick MD to engage in a little paintball while also getting in a solid morning run at Gambrill State Park. We were joined by one lonely Pacer (Bert) who managed to somehow get hit with numerous rounds of friendly fire...good times. 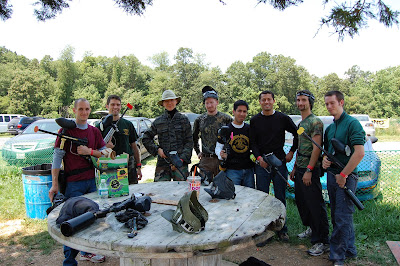 you guys should start a local summer biatholon team. this is the combination of shooting and cross country running. jason, remember that guy Garth? I believe this is something he did up upper maryland some where.

We were actually hunting man. I've had Edmund Burke in a crate for the last 3 months and let him out a few moments before that picture was taken. Naturally he wasn't very fast after being boxed up like that so it was an easy kill. One PACER down...17 to go.

the link above talks about a local MCRR who competes in summer biathlons.

I was mistaken. Damn!