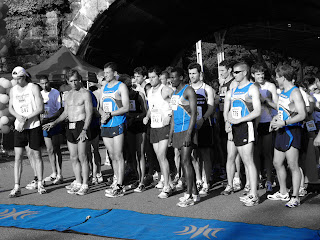 The Inaugural G-town Classic 8k came and went with success. All of the work and prep paid off as we had approximately 400 runners sign up and around 350 finish. All of this on a day when severe thunderstorms hit the area and threatened to put a damper on the event. This was not to be. NO way. Not on our race. Somewhere around 4:30 the sun appeared and it is was clear the race would be a go.

Logistics were smooth as volunteers and staff worked with positive enthusiasm to make sure water stations, packet pickup and overall race administration was covered.

Aside from the busywork, it was great to see all of the runners out there. There were the usual cast of characters including Philippe Rolly, Chuck (the Orchestrator)Moeser, Klim(who is apparently getting famous for his red hair), Chris(truly silent Bain), Wilson and lots of other familiar faces.

Prior to the race there was a little trouble as a gentleman had a problem with the heat and had to be helped off of the Capital Crescent trail. Yes, it was humid! None the less, we were able to help the man to safety and get prepared for the race.

As the race starting time approached, Luke Merkel was properly set up at the front with his bike and whistle and was ready to lead the charge. Other folks were doing last minute stretching and warm ups, etc.

All during this time I was able to take it all in as I blurted out random pieces of information on the microphone and tried to provide some guidance and structure to the pre-race scene.

With a few seconds to go, I handed the horn to Ben and jumped in so that I could run and see the event first hand. The GO word was yelled out and we were off. Off in the very front I could see the tall and lanky Wilson kind of hopping along with Wardian and the eventual winner, right there. As far as I could tell, the trail was clear as there seemed to be very little, if no, congestion. Yes, it went off well.

When I got done, Ben handed me the mike and I got a chance to encourage people as they pushed across the finish line. Totally cool.

When all was said and done and prizes handed out, etc. We did some clean up and headed over to get some beer and pizza and do some post race chatting.

I could go on forever with various details but I will spare you.

I do, however, want to give shout out and special thanks to Ben Cooke and all of the staff at the store who worked the race. All were positive and helpful. Also, a special thanks goes out to Jay Wind who did lots of behind the scenes work and provided race management expertise that only comes with years of experience.

Laura Turner was also very helpful and thanks to Robert and Peter for taking photos.
Lets make this a tradition that will continue for years to come.
Max
Posted by MAX at 6:13 PM

The video will be up soon.

Ennio Morricone I presume? Or maybe a little Randy Edelman?

The simple "start & finish" coverage I have of this race is not really conducive to music so I decide just to go with nat sound. I will have to plan more cinematic coverage of a future race and then have a composer write a score for it.

I took 400+ pictures of our GRC team and will figure out how to post on Flickr by week's end. I will post the address once I have it...

Congrats GRC for a great race. Everyone I spoke to thought very highly of it.

Thanks for the shout out and great race guys! Props have to go to Jason D. and Dave O. for the health-related rescue missions. All's well that ends well!