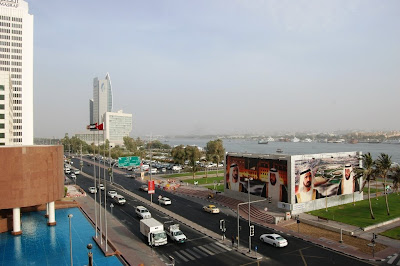 Dubai is a remarkably developed city that is best described as a concrete mosaic jungle. Lying on the Arabian Gulf of the United Arab Emirates, less than 10% of the U.A.E.'s economy is based on oil and gas, the majority of its wealth generation coming from ambitious real estate projects, trade and financial services. Temperatures while here have hovered in the mid to upper '90's added with humidity that makes it feel like 104+ degrees. Running is non-existent. In the three days that I've been here I haven't seen a single person running in public. This is probably due to a number of reasons: the heat, a lack of open and unencumbered spaces, lots of traffic, metropolitan congestion and cultural shyness. I believe the Islamic culture here is still quite modest as many men dress in traditional clothing covering their heads and bodies and some women dress head to toe except for the face and hands. I can't imagine anyone running in the streets in skimpy shorts either bare-chested or in a sports bra. Thus my running has been confined to the gym pictured below. 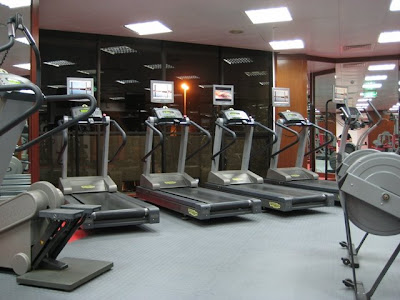 Dubai is known for a number of man made wonders including the worlds largest indoor ski resort (Dylan - The snowboarding looked epic and your dreads would have been a hit!), the Burj Dubai (in construction but will be the world's tallest man made structure), the Palm Islands (man made peninsula resembling a palm tree), the Burj Al Arab (famous building resembling a sail boat), along with many man made jetty's and waterways that sprinkle the coastline. Dubai is also known for SHOPPING MALLS and FOOD and AIR CONDITIONING. I do not recommend Dubai for running, but would recommend it for indulgence.