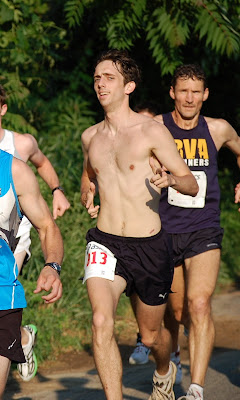 (Photo taken by JARRIN at the Georgetown Classic 8K)
Big congrats go out to our compadre Patrick Murray who this past Sunday competed in his first triathlon ever. The Nation's Triathlon is an Olympic Distance 1.5K swim, 40K bike and 10K run. Patrick finished in 89th place overall (2:24:07) but killed the run coming in 1st place out of 2,396 finishers. Murray's time for the 10k was 37:42.

Not sure if anyone else from GRC competed but kudos to all the finishers.