Journey to the End of the Night

It's not too early to think about our post-racing season adventures... The Journey to the End of the Night is a fantastic adventure through the dark streets of our nation's capital, and it's tentatively planned for Saturday, May 15th. Mr. Reaves and I teamed up and raced to victory in the inaugural event in 2008, and this would be a fun night for the anyone in the GRC up to the challenge. 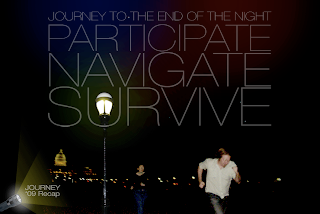 Here's the gist: Teams of adventure-seekers depart from a central location and criss-cross the city to a series of checkpoints while being chased by people lurking in the dark. If they tag you, you become a chaser. If you out-sprint them, you survive and continue to play. This "race" is as much about strategy as it is about speed and endurance. The first team to the final checkpoint is the victor, and will be spoiled with golden chalices overflowing with the juice of the jungle.

I will add this event to the race calendar. Just keep it in mind, and we can plan for it later in the spring.

I am intrigued. If around, I am in it to win it.

I was looking to do this or the great urban race, but it is the same day as the PSAC championships