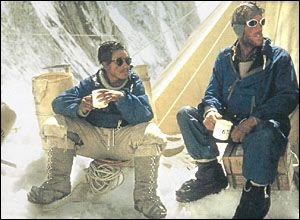 Though not a runner, Sir Edmund Hillary was an endurance athlete par excellence. Along with Tenzing Norgay he conquered the highest summit on the planet...sans oxygen and sans modern equipment. He, along with Roger Bannister, were named athlete of the century by some magazine back in 2000.
AP Article
WELLINGTON (Reuters) - New Zealand's Sir Edmund Hillary, who along with Nepal's Tenzing Norgay Sherpa became the first to conquer Mount Everest, died in hospital on Friday.
New Zealand flags flew at half mast at Scott Base in Antarctica on Friday, mourning the loss of one of the greatest adventurers of the 20th century.
In Nepal, Sherpa friends lit butter lamps and offered special Buddhist prayers in monasteries for the mountaineer, calling him a great philanthropist and friend of Nepal.
In 2003, Hillary received honorary Nepali citizenship in recognition of his services to the people and the Solukhumbhu region where Mount Everest is located.
"The legendary mountaineer, adventurer, and philanthropist is the best-known New Zealander ever to have lived. But most of all he was a quintessential Kiwi," New Zealand Prime Minister Helen Clark said on Friday in announcing Hillary's death.
Hillary scaled the world's highest mountain in 1953, telling companions after the climb: "We knocked the bastard off."
Hillary, 88, suffered a heart attack and died in an Auckland hospital on Friday. He had been ill for some time and local media reported he had been suffering from pneumonia.
Born in Auckland on July 20, 1919, Hillary led an uneventful life until he achieved his Everest triumph at the age of 33.
Then a beekeeper from near Auckland, the strapping six foot (1.83 meters) Hillary was chosen by British expedition leader John Hunt to make the final assault on Everest because of his experience in the Himalayas and immense energy and strength.
Sherpa Tenzing was chosen as his climbing partner.
Hillary and Tenzing set off on a cloudless morning after spending a night at high altitude on the south peak of the infamous South Col.
INCHING AHEAD
Encumbered by clothing and oxygen equipment modern climbers would deem museum pieces, they inched ahead until they reached the most formidable problem on the final ridge, a 40 foot (13 meters) rock now known as the Hillary Step.
Hillary "jammed" his way up a narrow crack running vertically up the rock using all his strength and determination and then hauled Tenzing up and they moved on with little to impede them.
At 11.30 a.m. they became the first to step onto the summit of the highest mountain on earth. For years neither would say who reached the summit first, but after Tenzing's death in 1986, Hillary said he stood on the summit first, followed by Tenzing.
By late afternoon they were back at the South Col camp and on June 2 word of the conquest was broken by the London Times.
The news won huge media coverage, with the "British" triumph coinciding with the coronation day of Britain's Queen Elizabeth and Hillary was knighted even before he descended from Everest.
After Everest, Hillary led a number of expeditions. In 1958, he and four companions traveled overland in three modified tractors to become the first to reach the South Pole by vehicle.
"He was a colossus. He was an heroic figure who not only knocked off Everest but lived a life of determination, humility, and generosity," said Clark.
HALF-MAST
In the 1960s Hillary returned to the Himalayas in search of the elusive Yeti and in 1975 he led a jetboat expedition to the source of the Ganges. But most of his energy was devoted to helping Nepal's Sherpa people who live in the shadow of Everest.
His Himalaya Trust raised about US$250,000 a year, building 26 schools, two hospitals, an airport and providing scholarships for Sherpa children in the Himalayan nation, home to eight of the world's 14 highest mountains including Mount Everest.
"He has done so much for us. If he is incarnated he can again continue to do good work for the human beings," said Ang Rita, a devout Buddhist and the first graduate of the first school opened by Hillary in the Everest region in 1960s.
"Many Sherpa people have offered private prayers while many others are holding special services in monasteries," he said, adding that Hillary's friends and Sherpas would organize a special service for him in Kathmandu.
Posted by KLIM at 10:32 AM